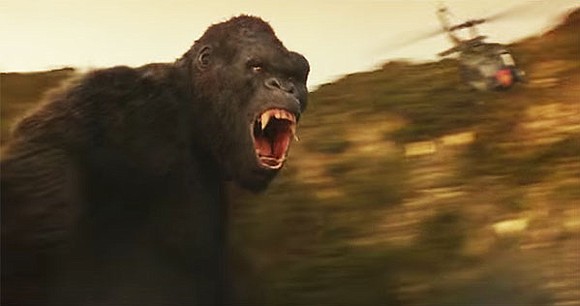 King Kong, the misunderstood primate, is back and full of justified rage. You can almost hear the soul asking the burning question: “Why can’t mankind stay away from killing and destroying everything they don’t understand?” Amen. Naturally, like many who feel ostracized and demonized, in this current political climate, I feel a very strong kinship.

A product of Warner Brothers, this installment, set in the brawling 1970s, is a mix of the films that painted the violent and murderous nature of man vs. man such as “Apocalypse Now” into an adrenaline pumping action film that is absolutely entertaining. An added bonus is that fact that it doesn’t have to work very hard because Kong is one of cinema’s most endearing and enduring characters. The filmmakers clearly did their homework, because it’s cool without trying.

There are obvious early comparisons to Peter Jackson’s 2005 “Kong,” but it’s like comparing apples with apple strudel. Helming this installment is a comparatively very young director, Jordan Vogt-Roberts (“The Kings of Summer”), who, according to production notes, chose 1973 because that’s when the United States pulled out of the Vietnam War, an unjust war and one that was protested passionately.

Hats off to the screenwriters Dan Gilroy, Max Borenstein and Derek Connolly and story creator John Gatins, for creating a fictional point located in the stormy Pacific Ocean that is near impossible to find on existing maps. As the unjust war ends, experienced top secret operative Bill Randa (John Goodman) itches for one last adventure and convinces the damaged Nixon administration to back a small expedition to try to find and map the mystical place “where God didn’t finish the creation, a place where myth and science meet.”

Lovers of war, destruction and the perceived bounty of spoils, the administration says yes to the endeavor. And just as misguided and glutinous as the aforementioned war they expect to get the job done quickly and well. Neither of those things occur.

The uncharted island environment screams, “Human beings stay away!” and offers dense, blinding fog and unforgiving rain. On deck is the very bitter Lt. Colonel Packard (Samuel L. Jackson) who’s peeved that the U.S. lost the Vietnam War and to that end, he brings his blood thirsty team of “Sky Devils” with quick trigger fingers and very little intelligence; Capt. Conrad (Tim Hiddleston), an oily SAS black ops vet now at loose ends; Mason Weaver (Brie Larson) as combat photographer; and Houston Brooks (Corey Hawkins) an intelligent biologist with a thirst for knowledge. Everyone has his or her own agenda.

Offering a glimpse of harmony is Hank Marlow (John C. Reilly), a pilot who crashed during World War II and has lived peaceably among a few natives. Marlow is empathic and is a much more multidimensional character and voice of sanity in the story.

The real star of the movie is the big man himself—Kong, who is just shy of 100 feet tall.

Note, it’s not like Kong is the biggest danger on the island. He has to defend himself from hungry and bold lizards that view the new humans as lunch, dinner and snacks.

Kong is much like the voiceless in most modern industrial complexes. He is painted to be utterly bad and therefore marked for termination. In the uncomfortable twist of “man vs. nature” Kong’s very existence is the reason Packard wants to wipe him from the face of the planet. A misguided pay back to the bloody defeat that American took in Vietnam.

There are plenty of action filled moments that are also flavored with strong emotional investment around Reilly’s character and frankly both the actor and the character steals the film.

“Kong: Skull Island” is a winner.