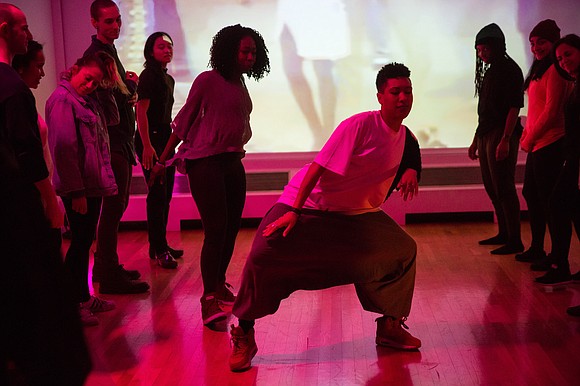 Toward the end of choreographer/performer Marguerite Hemmings’ “we free” at Gibney Dance (Feb. 23-25), she asked her audience to turn attention from the dance floor and watch a film in which the iconic jazz singer, pianist and songwriter, the late Nina Simone defines “free.” It “… open[s] people up so they can be themselves,” Simone said. “It’s a feeling … you know it when it happens. [There is] …no fear.” Hemmings is a fearless “young” dance maker, and for some seasoned artists, the direction that she is taking is one to be reckoned with.

Hemmings presented the first iteration of “we free” in 2015 on Gibney Dance’s “DoublePlus,” a shared a program with Katrina Reid, curated by Jawole Willa Jo Zollar (founder/visionary partner of Urban Bush Women). And like that iteration, also built on the notion of being free, this one was as raw and as complex. There was film, text, music and dance, and Kendrick Lemar’s anthem to the Black Lives Matter movement, “We gon’ be all right,” made a comeback. Upstairs, in a circle, before moving to the performance space, Arielle Rosales, one of the eight collaborators, enlivened the audience. Then, as an ensemble, the audience moved downstairs to a small and narrow space that Hemmings and the others shared. There were no chairs, so folks sat on the floor as if in her living room and got really close. The tight fit also included DJ BLKWYNTR (turntable), Solo Woods (guitar), Rosales (Cajon/square drum), and Bleue Liverpool (projection board). Hemmings and “Co-performers” Italy Welton, Courtney Cook and Jessica Phoenix fit nicely inside and we watched them at play, having fun, setting the mood.

DJ BLKWYNTR, who had been spinning popular tunes from the beginning, helped them sweat out their stories and hype the crowd until it was time for a pause, to see people in the room and get even closer. Between hellos and breaths, Hemmings stopped the music and said, “OK. Yeah. So, we free y’all.” Then she asked, “Anyone else got something on their mind?” Ready to share, or just ready for more, the now very acquainted audience roared. Hemmings followed with, “I think we should do some follow the leader.” Then she invited anyone who dared to stand and be with them for some “J-Sette” (the underground dance style born from Southern female drill-teams and continued in the gay African-American club culture and outwards). Two brave and “free” souls got up to J-Sette and when they were done, Hemmings turned to the rest of audience and proudly announced, “They killed it!” The tempo slowed when Hemmings, Welton, Cook and Phoenix sat on the floor to “cool down.” Woods and Rosales took over on guitar and cajon, respectively, chanting and singing until DJ BLKWYNTR and the feisty audience picked up where they left off.

In this iteration, like the first, Hemmings stripped away layer after layer of the conventional, the accepted, the expected to reveal her “…new way of seeing.” Also like the 2015 iteration, she brought the audience into the mix by passing on her sense of being free. After saying thanks to Nina Simone, she turned to the audience and said, “Let’s try to be fearless…let’s get in formation.” Without hesitation, they began what may now be her signature ending, a “Soul Train” line. “What’s your walk right now?” was just one of her prompts.