Women take NYC: A Day Without a Woman brings out thousands 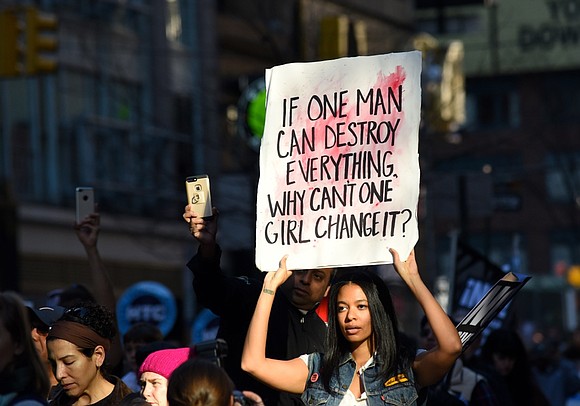 A vociferous army of women gathered together in New York City in observance of International Women’s Day, and American women across the nation ditched their workload, threw on their red garments and took to the streets to demonstrate the economic and political clout women hold in America.

On the heels of January’s historic Women’s March on Washington, the organizers and activists behind this movement announced last week that their next large-scale act of mobilization, A Day Without a Woman, would take place Wednesday, March 8.

The raison d’etre was to illustrate the impact that women have on the city’s economic, cultural, political and social infrastructure. Showing solidarity with a worldwide sisterhood was also the other motivating factor.

For those unable to take the day off, City Council members Laurie Cumbo, Helen Rosenthal and members of the Women’s Caucus organized a Sit-In, Lunch-In and Talk-In on the steps of City Hall. Many women gathered on their lunch breaks to discuss the influence women have on America and what A Day Without A woman really means.

Inspired by recent actions such as the Bodega Strike, led by Yemeni immigrants in New York City, this strike calls for women nationwide to refrain from performing both paid and unpaid labor, to avoid shopping (with the exception of small, women- and minority-owned businesses) and to wear red in solidarity.

On the Women’s March official website, organizers explained that this strike, which also coincides with International Women’s Day, is meant to call attention to the “enormous value that women of all backgrounds add to our socio-economic system—while receiving lower wages and experiencing greater inequities, vulnerability to discrimination, sexual harassment and job insecurity.”

Nantasha Williams, a community activist from Queens and close affiliate of the event’s organizers talked about the importance of consistency in fighting for equal justice in America. Williams, a beneficiary of the Affordable Care Act, described President Donald Trump’s administration’s views on immigrants, women and gender justice as “troubling” and expressed why it was important for her to take part in the day’s events.

“After the Women’s March on Washington, we were trying to figure out what could be the second big punch, so I think it’s really critical that we continue to resist and be visible about our resistance,” Williams told the Amsterdam News.

Before marching to Trump International Hotel, thousands of women gathered to hear encouraging words from their sisters, including radio personality Angie Martinez and activist Erica Ford.

Ford gave a powerful message to the crowd, highlighting the importance of mentally preparing for the work that needs to be done to continue to help each other during this critical time in history.

“If we’re not preparing our minds for this work, then we get destroyed by judgment, by jealousy, by ego, by envy and a lot of other things that keep us as fabulous women from working together,” said Ford.

Although news about the strike circulated widely throughout social media, the event was accompanied by in-person actions. The official New York City gathering took place Wednesday, March 8, on Fifth Avenue and 59th Street. Participants were asked to wear red in support. A cursory look on the streets and on buses and trains revealed a decent number of red-clad women and men who seemed to have donned their red scarves, caps or evens shoes in support of the action.

Despite a peaceful protest, several of the event’s organizers were taken into police custody for disorderly conduct, while onlookers cheered their civil disobedience. Many of the same crowd went on to a rally at Washington Square Park later in the day. Women, feeling as if their voices were heard and their presence on the streets or absence from was work felt, spoke about looking out for the next call to action. For more information, log on to www.womensmarch.com.