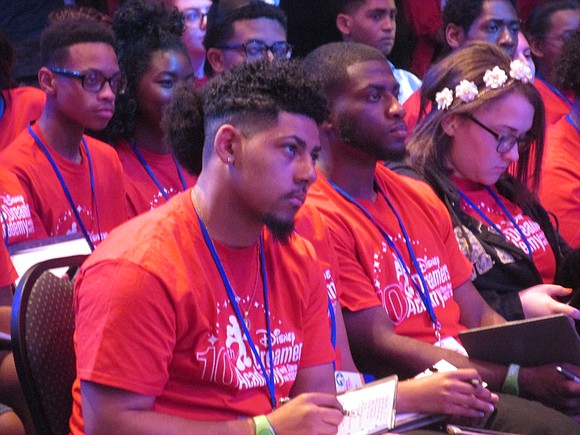 Dreamer of the year DreShawn Spearman from Fayetteville, N.C. attends a session on self-image and success at the Disney Dreamers Academy. Cyril Josh Barker photo

ORLANDO, Fla. - Teens learned about the value of self-image along with showcasing their experiences during their "Deep Dive" on the third day of the 10th Disney Dreamers Academy with Steve Harvey and ESSENCE magazine at Walt Disney World on Saturday.

Dreamers were taught about how to present themselves and making a good impression. They also got a chance to hear more inspiring words from those who have been there before them.

Dreamers heard a rousing speech by renowned educator Dr. Steve Perry, founder and principal of Capital Preparatory Magnet School in Hartford, Conn. Perry touched on the fact that while the teens might have made it to the Dreamers Academy, there is still work to be done to reach their goals.

During the day Dreamers also heard from Mikki Taylor, Dr. Alex Ellis and Sonia Jackson Myles, founder and author of The Sister Accord. 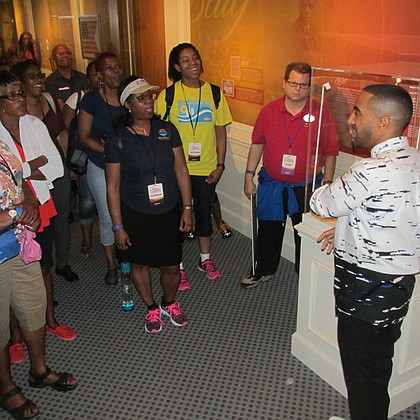 Fields said that she she and the other celebrities came to the event to show youth that their dreams can come true and gave advice on how they can succeed.

“Helping to fuel and and enhance dreams is very important,” Fields said. “The vision of Steve Harvey, Essence and Disney being able to show their support and that I support them in their supporting of this. None of them have to do this and yet they see this value in young people.

Dreamers also got to have some free time at the theme parks at Walt Disney World during the day inlcuding exploring the American Heritage exhibit at EPCOT's American Adventure Pavilion. The exhibit features the Kinsey Collection currently on display and features artifacts, art pieces and historical figures from Black History.

In the evening the teens showcased what they learned during their Friday “Deep Dive” sessions at the “Dreamer Career Open Mouse” exhibit. Setup similar to a job or science fair, Dreamers gathered at various stations to explain their career paths and how they plan to make their dreams reality.

On Sunday the Dreamers Academy comes to a close with a commencement ceremony.