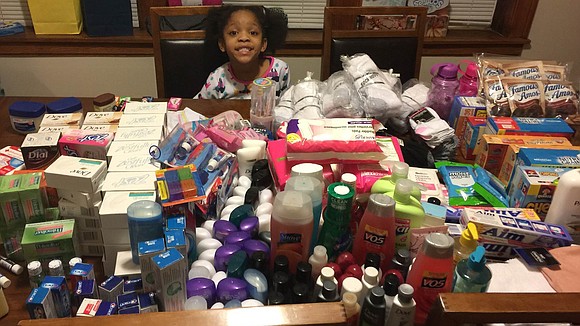 Armani Crews prepares care packages with donated toiletries for a food drive for the homeless on her 6th birthday. From Artesha Crews

(CNN) -- Armani Crews was turning 6. But what she was asking her parents for was far from a typical birthday party.

The Chicago kindergartener said she didn't want a celebration with her friends. She wanted, instead, to feed the homeless.

When her mom said they could hand out sandwiches, she insisted on serving exactly what she'd have had at her party.

When her dad warned she wouldn't get any presents, she replied, "That's okay. As long as they can eat, I'm fine."

That, says her mom, is when the family realized Armani was serious.

Artesha Crews knew her daughter was always interested in helping others -- ever since Armani saw her big brother give leftovers to a homeless man once.

So what she was proposing didn't come as a surprise to the family.

As soon as Armani's plans spread through Facebook and word of mouth, friends and coworkers started donating.

They collected bottled water and fruits.

They put together care packages, each with everyday essentials like toothbrushes, toothpaste, deodorant, hand sanitizer, and protein bars.

Every night, Armani helped assemble the packages, her excitement growing as her birthday approached.

Armani wore a tiara and a smile as she stood with other volunteers to hand out hot meals and care packages.

About 125 people were lined around the block.

"It was a beautiful thing to see and a blessing," her mother said. "One man told us that he hadn't had a hot meal in a long time."

The family plans to make the gesture a family tradition and host more food drives in the future.

"We take a lot for granted," Artesha Crews told CNN.

"There are plenty of places in Chicago that need help. If we help each other, we'll be okay."