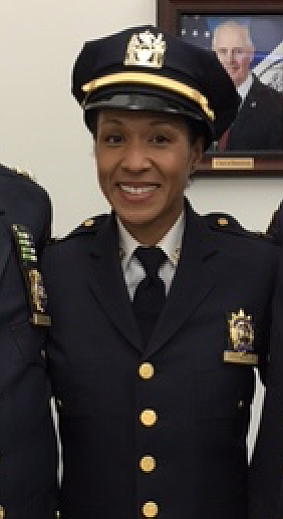 Tania Kinsella stands out among the NYPD not only being a so-called minority in the police force but also for her achievements.

In late 2016, Kinsella was promoted from lieutenant to captain on Staten Island, marking her as one of the few Black female higher-ups in the borough.

“I felt great,” she said. “I worked extremely hard to get here. I failed my first captain exam, and then I had the next one and passed. I was very proud.”

Growing up, Kinsella never had thoughts of being a cop. She attended John Jay College and after speaking with a law enforcement representative, decided to sign up during a career fair. It was then that the road to her career as a police officer began.

For the past 13 years, Kinsella has moved up the ranks at various precincts. She spent five years as a sergeant at the 68th, one year as a sergeant at the 13th, and then was a lieutenant of community affairs in Staten Island for two years. Now she is back where she began her career: the 120th precinct.

“I’m back as a captain were I started my career,” she said. “It is a very humbling experience.”

Law enforcement is work that she loves and at which she is very good.

“It’s great,” she said. “I work very hard. I have the reputation for working hard.”

This hard work is shown in the honors that she has received over the years.

In January 2013, she was honored as the 68th Precinct Community Council’s Cop of the Month for her work in trying to reduce the amount of domestic violence incidents. In April 2016, she was honored by the Albanian Islamic Cultural Center for building bridges between NYPD and the Albanian and Muslim communities on Staten Island.

Kinsella is a first generation cop and says she owes everything to her mother, who immigrated from Guyana.

“I wouldn’t have been anything if it wasn’t for my mother,” she said. “We lived in South Bronx. She put herself through nursing school and the Army. She moved us to Staten Island to give us a better life.”

What she is most proud of though, is being able to be an example for her 5-year-old daughter.

“I’m proud that she is able to see me rise through ranks so that one day she, too, can inspire to do great things,” Kinsella said.

Although she is a minority in both race and gender in the NYPD, she says that she does not have any issues about being Black or a woman on the force, as Staten Island is her hometown and she receives help from all of her collogues. However, she still finds that she has to be a bit more authoritative.

“I’m young,” she said. “I’m a woman and generally as women we have to be a little more authoritative than men. But I’m very fair. But I’m also stern. I take care of my cops. I take care of my supervisors and I would like to represent NYPD in a positive way.”