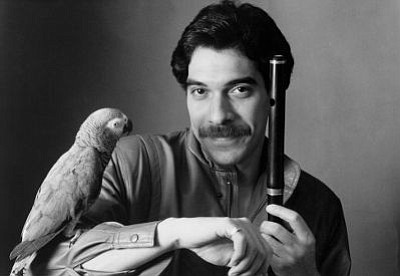 Dave Valentin, whose undeniable versatility as a flutist ignited Latin music and the movement of Latin jazz, died March 8 at a rehabilitation and care facility in the Bronx. He was 64.

The cause was complications of a stroke and Parkinson’s disease, said his manager, Richie Bonilla.

In 2003, Valentin won a Grammy Award for “The Gathering” with the Caribbean Jazz Project, an album that also featured the vibraphonist Dave Samuels. For seven years consecutively he was voted “best jazz” flutist by Jazziz Magazine readers.

“Dave was a great cultural ambassador from the South Bronx, who was the epitome of excellence,” stated percussionist, composer, bandleader and friend Bobby Sanabria. “Dave’s technical brilliance on his instrument made him a hit with fans all over the world.”

Valentin was introduced to music at an early age when his father, a merchant marine, returned home from Brazil with bongos and congas, which the youngster immediately began trying to play at the age of 5.

He took piano lessons when he was 9 years old and played percussion (congas and timbales) at age 10, often being paid $10 for gigs.

Valentin borrowed a flute and bought a Herbie Mann album that became his practice guide (on the track “Comin’ Home Baby”). His sudden interest was to impress a young lady (Irene Cathcart) in school, who played the flute. He did not capture his classmate’s heart, but the flute cemented his name in the annals of jazz and Latin jazz.

After graduating, he studied with the celebrated flutist Hubert Laws, who became his mentor. He also studied at Bronx Community College. Valentin developed a style that incorporated syncopation with roaring vocalizations, generating deep smooth overtones.

After college, Valentin was a junior high school music teacher in the South Bronx for three years. At night, he was busy developing a reputation in various clubs in the Bronx and Manhattan as a versatile flutist.

The percussionist Juan Rodriguez recalls playing with Valentin some years ago in a small lounge on the Upper West Side. “Playing with him was very special and his music will live forever,” said Rodriguez.

His recording debut was in 1977, playing on an album by violinist Noel Pointer and the esteemed Latin-jazz multi-instrumentalist Ricardo Marrero.

In 1978, Valentin was the first musician signed to Dave Grusin and Larry Rosen’s GRP Records label whose focus was jazz fusion and smooth jazz. The following year, the flutist released his first album as a leader, “Legends.” It was peppered with Latin-fusion, smooth and straight-ahead pieces.

He also toured with the percussionist Tito Puente for a few years and was music director of his Golden Latin Jazz All-Stars. After his long relationship with GRP, Valentin recorded with the Concord, CTI and Highnote labels.

In 1990, Valentin paired with the flutist Herbie Mann on “Two Amigos,” followed by three more albums for GRP. Valentin continued to perform and record with “World on a String” (2005) and “Come Fly With Me” (2006). His final release was “Pure Imagination” (2011), all on the Highnote Record label.

In March 2012, Valentin had a stroke that left him partially paralyzed and unable to perform. In 2015, he suffered a second stroke, and moved to a rehabilitation extended care facility.

Valentin is survived by a brother, George.

“There will be a large vacuum in the world of Latin jazz without Dave,” said Sanabria. “He will be greatly missed.”

Valentin’s wake was held March 11 at Montero Funeral Home in the Bronx. He was cremated and interred in New Jersey.