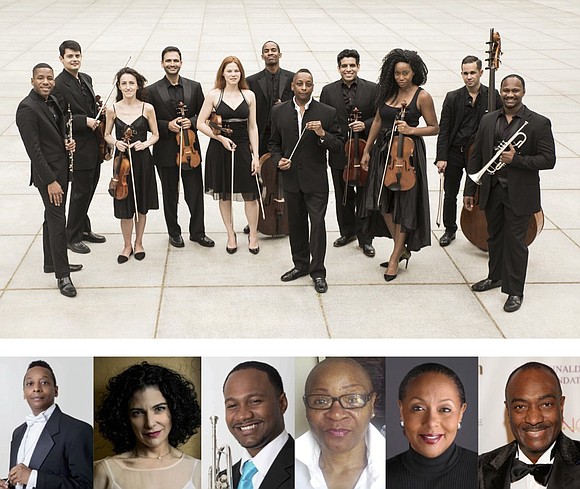 As part of Teachers College Columbia University Diversity in Classical Music Project, Ensemble du Monde explores the rich history of classical music in a program that features composers from myriad backgrounds, including African-American and Jewish descent. The program highlights Béla Bartók, a genius composer who escaped his native homeland of Hungary during World War II to immigrate to New York City to start a new life.

These composers and their heroic stories of struggle, in their own way, changed the fabric of music as we know it in America and throughout the world.

Hailed as “… the future of classical music onstage” by Time Out, Ensemble du Monde is one of the most dynamic and innovative chamber orchestras on the classical music scene today. Founded in New York City in 2000, it was named to reflect the diversity of its members, who hail from more than 15 countries, cultures and backgrounds.

In 2000 the ensemble was selected by Daimler Chrysler and Mercedes-Benz to perform at the world premiere inauguration of their new MAYBACH Car, an event that received worldwide multimedia press coverage. A Lincoln Center debut followed in 2002, and in 2004 the ensemble made its Carnegie Hall debut, which included renowned soprano, Deborah Voigt.

The members of Ensemble du Monde are graduates of some of the most prestigious institutions in the world, including the Beijing Conservatory, Cleveland Institute of Music, Conservatoire National Supérieur de Musique et de Danse de Paris, Curtis Institute of Music, Eastman School of Music Indiana University, Mannes College of Music, Manhattan School of Music, Moscow Conservatory, The Julliard School, Prague Academy of Music and Universität für Musik und darstellende Kunst Wien. In addition to performing with Ensemble du Monde, members have independent careers as solo artists and work with other prestigious

The orchestra performs concerts throughout New York in venues such as Carnegie Hall, The DiMenna Center for Classical Music, New York Society for Ethical Culture, Tenri Cultural Institute and Merkin Concert Hall, Kaufman Center in New York, where it performs innovative concerts throughout the year. In 2011 the Ensemble served as Ensemble-in-Residence for the International Festival Saint-Georges in Guadeloupe and in 2012 for the Nassau Music Society’s Festival of Afro-Caribbean Composers in the Bahamas, sponsored by Atlantis Resort, Alliance Française, Société Générale and the United States Embassy.

Led by its music director and conductor, Marlon Daniel, the ensemble’s mission is to reinvigorate classical music through interactive and high-level performances that are accessible to all by combining world-class artistry and diversity with innovative and accessible programming.