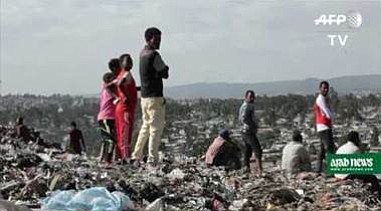 A giant landslide that crashed down on a landfill where hundreds of Ethiopians collected recyclables killed upward of 65 local area residents, including entire families, officials said Monday.

The landslide Saturday leveled more than 30 squatter homes at the Koshe dump site on the outskirts of Addis Ababa, according to Dagmawit Moges, a spokeswoman for the city.

Moges said more bodies were expected to be found in the coming hours. Communication Minister Negeri Lencho stated, “The rescue operation is still ongoing. Security personnel and rescuers are trying their level best to locate any possible survivors, while searching for the dead.”

Residents blamed a biogas plant being constructed on top of the rubbish for causing the collapse. They said work by bulldozers to flatten the area around the plant contributed to it.

Lencho denied that the plant’s construction had anything to do with the collapse. He blamed the squatters for digging into the hillside, destabilizing it and causing it to fall.

Koshe, whose name means “dirt” in local slang, was closed last year by city authorities who asked people to move to a new dump site outside Addis Ababa.

But the community there did not want the landfill, and so the rubbish collectors moved back.

Poverty and food insecurity are sensitive issues in Ethiopia, which was hit by a famine in 1984-85 after extreme drought. Approximately 500 waste-pickers are believed to work at the landfill every day, sorting through the debris from the capital’s estimated 4 million residents.

City officials say approximately 300,000 tons of waste are collected each year from the capital, most of it dumped at the landfill.

In recent years, the country has been one of Africa’s top-performing economies and a magnet for foreign investment, with growth in near-double digits and huge infrastructure investment.

In recent years, city officials have been trying to turn the garbage into a source of clean energy with a $120 million investment. The Koshe waste-to-energy facility, which has been under construction since 2013, is expected to generate 50 megawatts of electricity upon completion.