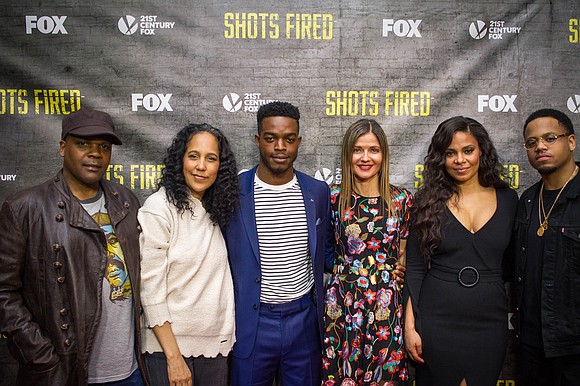 “This is a ten-hour movie. That’s important for the audience to understand,” stated “Shots Fired” creators, husband and wife, Gina Prince-Bythewood and Reggie Bythewood.

The ten-hour movie has a lot of moving parts because it takes a magnifying glass and examines the very explosive and dangerous aftermath of racially charged shootings in a very small Southern town. A Black police officer kills an unarmed white kid. In the same sleepy town, an unarmed Black kid was murdered, but that death warranted no special investigation. It was swept under the rug, and the people who witnessed the injustice

were bullied into silence.

“Sadly, we had a lot of source material to work with when creating this show,” shared Reggie Bythewood.

According to a project that was commissioned by The Guardian to track police killings in America, as of July 7, 2016, the project recorded that U.S. police killed at least 258 Black people in that 2016 time period. In a separate report issued by The Guardian it is estimated that “Black males aged 15-34 were nine times more likely than other Americans to be killed by law enforcement officers last year, according to data collected for The Counted, an effort by The Guardian to record every such death. They were also killed at four times the rate of young white men.”

“Shots Fired” goes deep, and in our current vindictive political climate this project could be the first, real movement to stir the pot and move the collective force to make permanent and legal change, or maybe it will blow up in the network and creators’ faces. It’s always possible they could be the victim of a madman’s Twitter child-like tantrum. It premieres March 22, so keep an eye on your social media feed.

The story is simple on the surface. An African-American police officer kills an unarmed white college student, and a small town in North Carolina is turned upside down. Bam. As the town begins to absorb the tragedy, the neglected murder of an African-American teen is brought to light, reopening wounds that threaten to tear the town apart. Injustice is the prancing, singing and dancing elephant in the room—#BlacklivesmatterLESS?

Keeping it colorful, the Department of Justice’s inquiry into these shootings involves seasoned, yet flawed investigator Ashe Akino (Sanaa Lathan) and a young, uptight and green special prosecutor, Preston Terry (Stephan James), both of whom are African-American.

Maybe it’s the color of their skin that motivates their actions, but they begin to pull back the layers of both cases because they suspect a nasty cover-up that may involve some of the state’s most powerful people, including fiercely political and rather scary North Carolina Gov. Patricia Eamons (Helen Hunt). She’s in a prickly re-election fight, and the recent shootings in her state are making it down right uncomfortable. Meanwhile, real estate mogul and owner of a privatized prison Arlen Cox (Richard Dreyfuss), is placed into the line of fire, along with Lt. Eric Breeland (Stephen Moyer), a seasoned veteran in the town’s Sheriff’s Department who gets caught in the

middle of the investigation.

Here is where it gets sticky and dangerous. “Shots Fired” is not afraid to look at the

racial divide from all perspectives. The gray areas are not always all that gray.

At a recent Q & A the show’s creators gave strong hints as to where the ten-hour movie will lead the audience. The panel included Sanaa Lathan, Stephan James, Richard Dreyfuss, Mack Wilds and Jill Hennessy.

AmNews: What do you hope people take away from “Shots Fired?”

Lathan: When you step outside your comfort zone of what you are used to thinking, I hope there is some compassion, and that’s what we need in this country right now.

Bythewood: We were very careful to not make a ten-hour film that was just going to vent. The other hope is that [the audience] they hang in there for the 10 hours because it’s an entire journey that people need to go through. After the 10 hours, hopefully there is some consciousness to be raised.