The Notorious B.I.G. celebrated in Brooklyn 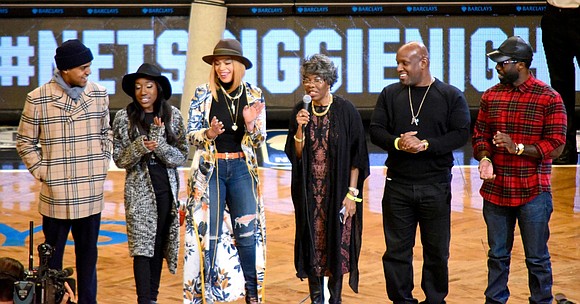 Friends and family of Notorious B.I.G.

One of the world’s greatest rappers was remembered in all manner of events, from the floral tribute and pilgrimage in front of his 226 St. James Place, Brooklyn, former home, to spoken word in front of his mural on Bedford Avenue and Quincy Street, to a big event at the Barclays Center. Even the Keyfoods supermarket on Fulton Street around the corner from his old house honored him with specially printed bags to commemorate the fact that he used to bag groceries there as a youngster.

Wallace was 24 when he was shot and killed March 9, 1997, as he left a music industry party in the front passenger seat of a Chevrolet Suburban. An unknown assailant pulled alongside and fired multiple times, hitting the young father of two children four times. He died at Cedars-Sinai Medical Center after arriving there in full cardiac arrest. So, this past Sunday at Brooklyn’s Barclays Center family and friends, in attendance with hip-hop mogul P. Diddy and Wallace’s mom Violetta Wallace, celebrated the life and times of the man who told the world that he went from “ashy to classy.” His jersey was retired to the rafters in front of the crowd who came to see the Nets versus the Knicks. The Brooklyn team took the game 120-112!