You’ll never see the MTA in the same way! 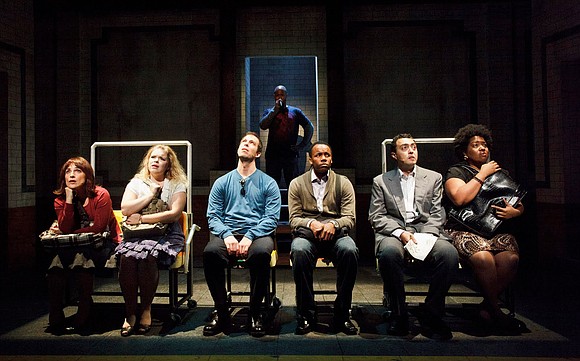 Acapella singing has found a home on Broadway with “In Transit,” a new musical playing at the Circle in the Square Theatre on West 50th Street, with a story based in New York City that spotlights the New York City MTA.

“In Transit” is an engaging musical that looks at so many elements we encounter on the subways every day that we don’t take the time to notice and truly think about. It talks about the people who make their living making music on the subway platform, the everyday people who ride the subway, the subway workers—cleaning people, token booth clerks and other transit workers. We also get to know about some of the stories of the people taking the train. We get to know Jane, a temp, who has dreams of being a Broadway actress, and Trent and Steven, an engaged couple trying to plan their wedding and figure out how to deal with Trent’s Texas-born, bible-quoting mother. There’s Nate, a man who had a great job and title until he sent a memo throughout his company criticizing his boss. Now he is broke and trying to find a way to survive. Then there’s Ali, a girl who let love cloud her judgement. She stopped going to school and moved to different states to follow her love Dave, who realizes he doesn’t see a future with her. She has a difficult time moving on and turns to running and therapy for comfort. Watching this musical made me realize I’ll never approach riding the trains the same way again. Every person on that train is an individual with a story to tell, hardships they’re dealing with and frustrations in their lives.

As New Yorkers, we are used to being tough, untrusting of strangers and often uncaring. “In Transit” demonstrates what can happen when people do care about each other and somehow and sometimes in the strangest ways end up connecting. It also encourages people to follow their dreams, no matter what obstacles arise. “In Transit” opens the eyes and touches the soul, so make plans to see it—you must go!

This musical has rap, beat-boxing and glorious singing. The beat-boxing beautifully moves the story along. “In Transit” also has a very creative book, music and lyrics by Kristen Anderson-Lopez, James-Allen Ford, Russ Kaplan, Karla Lant and Sara Wordsworth, based on an original concept by the aforementioned, along with Gregory T. Christopher. It features direction and choreography by Kathleen Marshall.