Hostos aims for a national championship 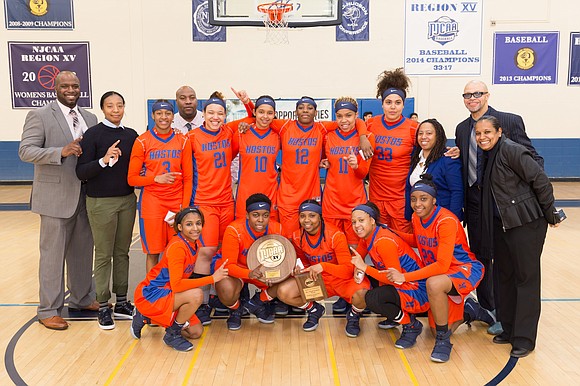 A victory at the Region 15 finals earned the Caimains a trip to the National Tournament in Utica, NY Contributed

“Our main objective is to change lives,” said DeVernie Winston, head women’s basketball coach at Hostos Community College in the Bronx. “Although we have a great coaching staff that goes out and finds amazing talent, our job is to make sure that those who accept the challenge of being a part of our program … develop on and off the court.”

This season has been an incredible season for the Caimans, who went undefeated in CUNYAC play. The team is on a 25-game winning streak after victories in the NJCAA Region 15 quarter-finals, semi-finals and finals. This week the Caimans make a historic, first-ever trip to the Division III NJCAA National Tournament, which takes place at Mohawk Valley Community College in Utica.

A key part of the Caimans’ winning formula is point guard Destini Green, who was named CUNYAC Player of the Year, Region 15 Player of the Year and the Region 15 Tournament Most Valuable Player. The Bronx native, a graduate of DeWitt Clinton High School, said basketball is in her blood.

“Hostos is very family oriented,” said Green, a sophomore business major, who was discovered at an open team workout. “I feel comfortable playing here. This year has definitely been a lot of hard work and dedication. Everything came together at the right point in time.”

She added, “[Being floor general] has helped me on and off the court. My dad is my mentor and he always told me to be a leader.”

Green, who looks up to Allen Iverson, Chris Paul and Becky Hammon, said playing basketball is second nature. After an outstanding year at Hostos, it appears she will continue to play at a four-year institution. She already has attracted considerable interest.

Defense is a key to Hostos’ success, so the players plan to bring it against defending champion Roxbury Community College. Winston said this team has a wide range of talent, and the fact that the players hung in both semesters allowed them to play in sync. All the players bought into what the coaches were saying, which made for a very special season.

“Our coaching staff worked really hard to make sure the players did extremely well in the classroom,” said Winston. “Everything you do off the court translates to what you do on the court. This team is exceptional.”