McLaughlin, Cunningham live up to hype at New Balance Nationals 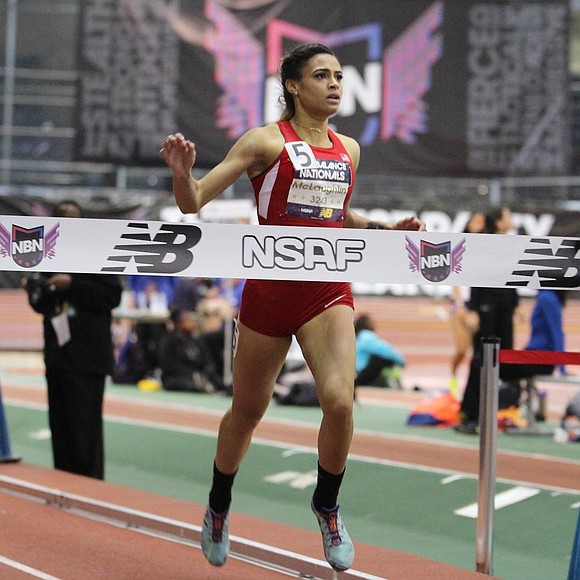 Sydney McLaughlin is a prodigy and rising star on the international sports landscape.

Last summer the 17-year-old from Dunellen, N.J., became the youngest United States track and field Olympian since 1972 when she competed in the 400-meter hurdles at the Rio Olympics after her third-place finish at the U.S. trials. The neophyte made it to the semifinals in Rio and captured the attention of close followers of the sport as well as casual fans.

So it was a given that the senior from Union Catholic Regional High School in Scotch Plains, N.J., would enter the New Balance Nationals Indoor meet at The Armory in Washington Heights (Manhattan) this past weekend surrounded by hype and high expectations.

She didn’t disappoint. Running in her last high school race, the University of Kentucky-bound McLaughlin, who first graced The Armory track in 2013 as a freshman, blazed 51.61 on Sunday, breaking her own national 400-meter record of 51.84 established at the Nationals at The Armory last March and elevating McLaughlin to third of all time on the world under-20 list in the event.

Despite her spectacular showing, which had the enthusiastic crowd in an uproar as she approached the finish line, McLaughlin was only tepidly satisfied. “I think I didn’t run the race I wanted to,” she said afterward. “But…it’s a great way to end my high school career.”

The same can be said for Trey Cunningham. The senior from Windfield High School in the City of Windfield, Ala., came into the Nationals as one of the best scholastic sprinters in history. The future Florida State speed merchant solidified his credentials with a dominant performance in the 60-meter hurdles—his specialty—setting an under-20 world record in 7.40.

After rocketing past the finish line and subsequently eyeing his time on a video screen, Cunningham exuded unrestrained emotion, thrusting both of his arms upward as he excitedly ran another 15-meters in celebration.

“Awesome” was his response in describing his feelings as the fastest teenager ever in the discipline. It was also redemption for Cunningham after placing fourth in the event at last year’s Nationals.

In addition to McLaughlin and Cunningham, there were many other memorable achievements, including 17-year-old high school junior Armand Duplantis from Lafayette, La., clearing an under-20 world record of 19 feet 1 inch in the pole vault.

Senior Tara Davis of Agoura High School in Agoura, Calif., the world under-18 champion in the long jump, won her specialty with a distance of 21 feet, 2.75 inches on Saturday and capped her remarkable weekend with a win in the 60-meter hurdles in 8.14 seconds on Sunday.

Tyrese Cooper, a junior from Miami Norland Senior High School in Miami Gardens, Fla., who will turn 17 next week, announced himself as one of track and field’s top young talents after his victories in the boys’ 400-meters in a meet record 46.55 and the 200-meters in 21.05.

The WAR Track Club of Virginia, ranked third in the nation in the girls’ 4x200 meter relay when they settled into the starting blocks, defeated state rival Western Branch, the nation’s top-ranked quartet before the race began, in a time of 1:36:35 to earn the title.