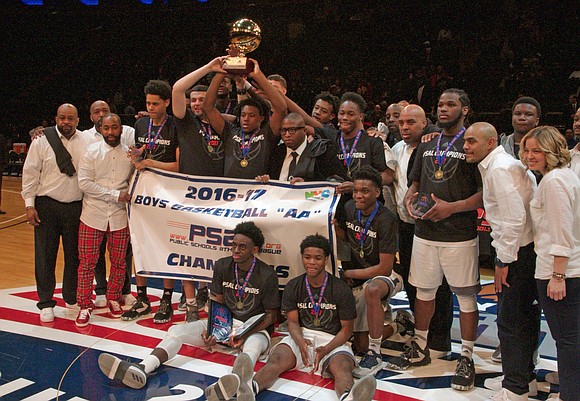 The 2017 NYC PSAL High School championships shared the basketball court of Madison Square Garden Saturday, the home of the New York Knicks and host of the Big East Tournament that concluded over the weekend.

Jefferson High School’s poor play in the second quarter was the cause of their loss to Lincoln High, who won 82-64, capturing the Boys Championship.

“Playing in Madison Square Garden is big,” said Gladden. “I stressed to them at the beginning of the year, don’t take this for granted. Two teams are going to be here. It’s not a guarantee that you will be there.”

The boys game started off slowly as each team felt each other out, ending the first quarter 11-10, Lincoln over Jefferson. Lincoln then exploded in the second quarter, outscoring Jefferson 25-7, doubling up their lead to end the first half 36-17.

The third and fourth quarters were equal, each team scoring 21 in the third. The question then became whether Jefferson could come from behind 57-38 to tie or beat Lincoln in the game’s last eight-minute quarter.

Jefferson did outscore Lincoln by one in the fourth, 26-25, but it wasn’t enough to make up for the 18-point deficit in the second. Lincoln was blocking shots, defending the rim in the paint, down low, avenging last year’s 29-point loss in the championship to Jefferson, advancing to the Federation AA semifinals March 24 in Glens Falls to play Cardinal Hayes High School in the Catholic school championships.