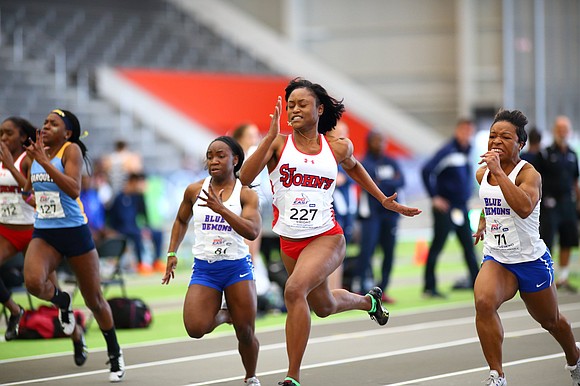 The last few weeks have been an exciting and somewhat remarkable time for St. John’s University track athlete Adriana Wright. The final weeks of indoor track and field season were filled with big accomplishments. She won three individual titles at the Big East Championships, scored the most points of any individual athlete and was named women’s High Point Performer. In addition to her gold medals in the 60-meter hurdles, the 60-meter dash and the 200-meter dash, Wright ran in the Red Storm’s 4x400 relay team that finished second.

Wright’s shining star in Division I track is an impressive testament to talent, resilience, opportunity and great coaching. Two years ago, Wright was setting Division III records at Lehman College, winning indoor and outdoor NCAA titles and being named NCAA Division III Outdoor Track & Field Women’s Athlete of the Year. Those accomplishments put her on the radar of Division I coaches, including St. John’s sprints and hurdles coach Aliann Pompey.

“[Indoor season] was kind of quick, but I enjoyed it,” said Wright, who sat out a year after transferring and just started competing for St. John’s in January. At the final indoor meet of the season, the ECAC Indoor Championships, Wright set a new St. John’s record in the 200-meter dash. She is also one of eight Red Storm athletes to be named to the All-Big East Indoor Team.

“It is a bit competitive between us in training,” said Wright. “That’s good, because in training the body tells you, ‘I’m tired,’ but teammates like Maya [Stephens] and Raquel [Ricketts] are always going to say, ‘Let’s go.’ It helps and we build each other up.”

Wright continued, “Coach Pompey is the best. She believed in me more than I did that I could break [the school record in the 200]. Each time we trained, she kept pushing us, saying we have the potential to be the best.”

An economics major who plans to be a financial analyst, Wright hopes to be granted another year of eligibility to compete at the collegiate level. Pompey said that would give Wright the chance to achieve her potential and put her on course to compete internationally for her native Jamaica.

The outdoor season starts March 25. In addition to sprints and relays, Wright will compete in the 100-meter and 400-meter hurdles with the goal of qualifying for the NCAA Championships.