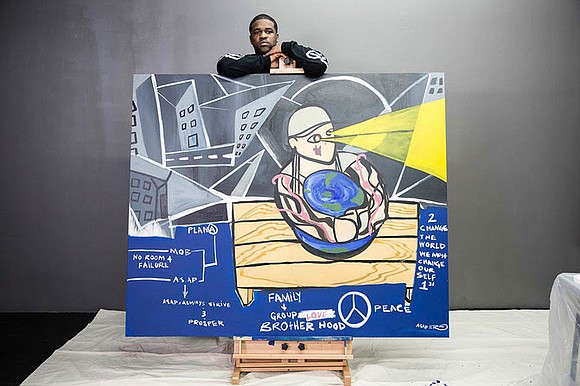 Rapper ASAP Ferg is donating a large scale oil painting that he originally debuted during Art Basel Miami Beach 2015 to the A$AP Yams Commemorative Gala & Art Auction that will take place this weekend in New York.

The painting—called "Tatted Angel"— is a piece that Ferg painted after Yams passed away and features an angular backdrop of New York City streets, a breakdown of inspirational A$AP-oriented phrases, and an illustration of Yams himself, hugging a globe and shooting beams of light out of his eyes.

The gala, co-hosted by the ASAP Foundation (Always Strive and Prosper Foundation) and the Department of Psychology at Columbia University, will be held on Saturday, March 25 to honor the legacy of Steven "A$AP Yams." Yams passed away on January 18, 2015.

Proceeds from the gala and auction will be utilized to promote education and awareness regarding substance use and abuse. The ultimate goal is provide youth with the best available information.