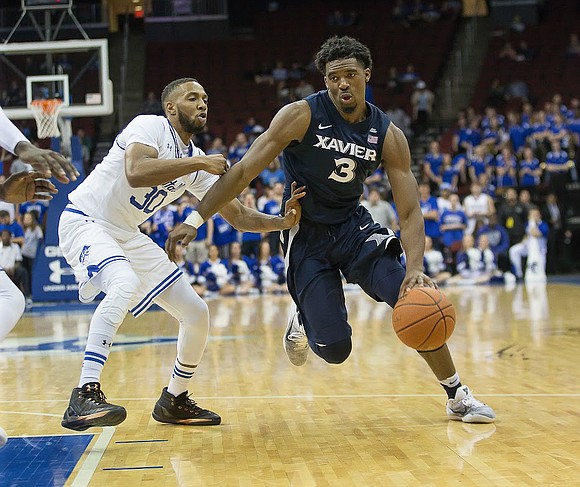 If you bet the top ranked Villanova Wildcats, the defending NCAA Men’s Champions, to be the first No. 1 seed eliminated from this season’s tournament, you were correct. Wisconsin, a No. 8 seed, knocked off Villanova 65-62, a major upset to advance to the Sweet 16, which begins today (Thursday). East region games are being played here at Madison Square Garden.

Three other major upsets also occurred that made you toss out your brackets. South Carolina, a No. 7 seed, defeated Duke, a huge win for the Gamecocks over the highly favored No. 2 seed, who were expected to at least advance from the second round to the Sweet 16. It’s South Carolina’s first appearance ever this far in the rounds.

Xavier, a No. 11 seed, defeated Florida State, No. 4, and Michigan, No. 7, knocked off Louisville, No. 2, adding to the upset total. Xavier is the lowest seed remaining of the initial 68.

Winners from today and tomorrow, Thursday and Friday, from each of the four regions play this weekend, the Elite Eight, and then on to the Final Four next weekend, concluding with the championship Monday, April 3. Both colleges from this area, Iona and Seton Hall, have been eliminated, each in the first round. Carolina, Gonzaga and Kansas are the three of four remaining No. 1 seeds in the tournament.

The most anticipated matchup, the marquee game, is the No. 2 seeded Kentucky Wildcats versus the UCLA Bruins, No. 3, Friday. UCLA features 6-foot-6 freshman point guard Lonzo Ball, whose father, LaVar Ball, the media’s current source for headline grabbing quotes, claims that his son is better than 2009 first-round draft pick, guard Stephen Curry, an NBA champion and two-time NBA MVP, and that Lonzo and his two younger brothers, both high school ballers, are deserving of a billion-dollar sneaker/apparel deal upon signing.

“That’s our number,” said LaVar Ball. “A billion, straight out of the gate. And you don’t even have to give it to me all up front. Give us a hundred mil over 10 years.”

“Put Steph Curry on UCLA’s team right now, and put my boy on Golden State and watch what happens,” he has stated. Michael Jordan, Charles Barkley and LeBron James have all recently been included in quotable, unhinged soundbites by the father.

As a high schooler, Ball was awarded multiple national High School Player of the Year honors after leading his team to an undefeated record and a national championship. As a UCLA freshman, he’s broken the school’s single-season assist record and is first-team All-American.  He’s been voted top freshman in the nation—the Wayman Tisdale Award—and is projected to be a top 2017 NBA draft pick.

Madison Square Garden hosts the east region of the Sweet 16 and the Elite Eight. No. 3 Baylor, hailing from the state of Texas, plays South Carolina, No. 7, followed by the Wisconsin Badgers, No. 8, versus the Florida Gators, No. 4, a back to back tomorrow night (Friday), here in New York City. Winners of these two games will play Sunday in one of the Elite Eight games to determine who advances to Phoenix. for the Final Four and to the National Championship.