Gwendolyn Brooks, a poet of exquisite words and insight 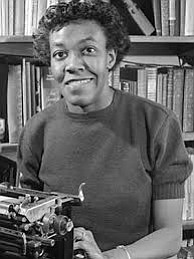 Some African-American personalities are so legendary that hardly a season passes that their achievements, their contributions, are not invoked. The recent death of Mari Evans and the scheduled appearance of Dr. Haki Madhubuti in our region are reminders of the prestige and legacy of poet/author Gwendolyn Elizabeth Brooks. Evans profiled Brooks in her rewarding compendium “Black Women Writers—1950-1980,” and Madhubuti will be singing her praises this coming weekend at the Black Writers Conference at Medgar Evers College in Brooklyn.

“Our Miss Brooks” in Brooklyn is the title of the event, with Madhubuti keynoting, but she and Madhubuti have deeper ties to Chicago, although both have had an impact on the world far beyond this Midwestern center.

The reverence Madhubuti will extend to a writer he views as a mentor and one that he published at his Third World Press is sure to be resonating with passion and insight because few knew her as well and shared her literary depth and intimacy with such conviction to African-American culture.

Although Brooks is best known for her long residence in Chicago, she was born in Topeka, Kan., June 7, 1917. She was a child when her family moved to Chicago, where her father was a janitor with aspirations for a medical career and her mother was a teacher and a classically trained pianist. Brooks was only 13 when her first poem, “Eventide,” was published in American Childhood Magazine.

Four years later, mainly in the pages of the Chicago Defender, her poems were often featured, and she gradually began to cultivate an audience of readers who would be the bulwark of her future work. The poems published in the Defender and a degree from Wilson Junior College would provide both the confidence and the experience she needed to begin assembling her poems in her first book, “A Street in Bronzeville” (1945). In 1949, in her second collection “Annie Allen,” she chronicled a Black girl’s coming of age as well as the challenges faced and overcome by the urban poor. The book earned her a Pulitzer Prize, the first for an African-American writer.

Brooks shifted gears in the early ’50s and published her novel “Maud Martha” (1953), in which she, more than anything, asserted and affirmed her quest for humanity at any cost. The same exquisite writing, the precision and coherence so redolent in her poetry are distilled in the chapters of the novel.

But it was back to basics by 1956 with the publication of “Bronzeville for Boys and Girls,” poems dedicated to Black children. The sonnet form she advanced in “Annie Allen” was given wider range in “The Bean Eaters” (1960). Notable, too, was Brooks’ experiment with looser applications of free verse that would be more pronounced later in her collection “In the Mecca” (1968).

A far more significant development had occurred by the time of “In the Mecca,” which was her growing involvement with racial identity and the Black political revolution that touched practically every aspect of African-American culture in the ’60s. “Until 1967, my own Blackness did not confront me with a shrill spelling of itself,” she confessed in an essay published in Evans’ volume. “I knew that I was what most people were calling ‘Negro’; I called myself that, although always the word fell awkwardly on a poet’s ear, I never like the sound of it.”

It was in the spring of that year, while attending a writers’ conference at Fisk University, that she began to feel the real energy of the Blackness impulse, particularly by meeting such writers as Hoyt Fuller, Ron Milner, Lerone Bennett, John Oliver Killens, David Llorens and Dr. John Henrik Clarke. This identity and the push for a Black aesthetic became more tangible when her next book of poems was not with Harper but with Dudley Randall’s Broadside Press in Detroit.

A succession of books that included “Riot” (1969), “Family Pictures” (1970), “Aloneness” (1971); “Aurora” (1972) and “Beckonings” (1975) marked not only her break with mainstream white publishers but also a growing political consciousness that helped small Black independent publishers. Her commitment to Broadside would provide a stimulus to a subsequent number of Black presses, including Third World Press, where she published “To Disembark” (1981) before launching her own Brooks Press.

There is no easy, facile summary of Brooks’ work, but literary critic Addison Gayle Jr. wrote that Brooks labeled her work before 1967 as “conditioned, based on an assumption that her selfhood as a Black woman was defined, or at least conditioned, by the white world.” Gayle notes that Madhubuti stated that her poetry was “fatless.” And by the late ’60s she had begun to alter her approach, wanting to write “poems that will be noncompromising.” “I want poems that will be meaningful to those people [Black people] I described a while ago, things that will touch them,” she said.

There is no question about Brooks’ identity with Blackness, but it took a more radical turn by the ’60s, keeping with upheaval that permeated the era. Her kinship and ferocity were never in doubt as she “disembarked” from one tone and attitude to take on one consistent with the revolutionary zeitgeist put forth by writers and activists such as Madhubuti, Amiri Baraka, Larry Neal and Sonia Sanchez.

Even so, her poetic and literary influence were extensive, touching writers in a variety of crafts and venues, both here and abroad. When, at 68, she was appointed the first African-American consultant at the Library of Congress, it was a plateau reflecting a portion of her wide acclaim. Another example of her global appeal occurred in 1987 on her 70th birthday at the University of Chicago, when a diverse ensemble of writers gathered to salute her service and achievements.

This salute will happen again Saturday at Medgar Evers with Madhubuti’s keynote address and a series of workshops with panelists evaluating and commenting on Brooks’ impressive resume. It would take a page just to list her numerous awards and citations.

A daylong tribute to Brooks is just another step toward a full appreciation and commendation of her tremendous literary legacy.