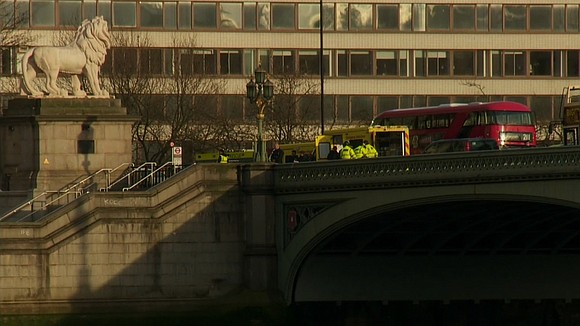 London police believe they have identified the Parliament attacker, but will not name him publicly at this point, Rowley said. CNN

As the inquiry into the atrocity gathered pace, Prime Minister Theresa May revealed the attacker was once linked to violent extremism. He was thought to have been inspired by Islamist ideology, she said.

In an address to the House of Commons -- reconvened less than a day after it was placed in lockdown as the attack unfolded outside -- May vowed that Britain's freedoms and values would remain undiminished.

Three people died in the attack. An American man and a British woman of Spanish origin were killed when Masood rammed a rental car onto the sidewalk on Westminster Bridge. Masood then stabbed an unarmed police officer in as he stood guard at Carriage Gates, an entrance into a cobbled courtyard frequently used by Members of Parliament and staff.

An ISIS-affiliated news agency claimed that the extremist group was behind Wednesday's outrage, which left 29 people requiring hospital treatment. Some remained critically ill on Thursday.

• Khalid Masood had previous convictions for violence but not terrorism offenses, police said. • Kurt Cochran, from Utah, is named by family and his church as having died in the London attacks. • Injured include 10 nationalities besides the British, among them French, South Korean and American. • Mayor of London Sadiq Khan said the swift action of London police had prevented more deaths. • Addresses were searched in Birmingham and elsewhere and a number of arrests were made. • Queen Elizabeth II voices her "thoughts, prayers, and deepest sympathy" for all those affected.

May: 'Our values will prevail'

In a defiant speech, May vowed that Britain would not be cowed by the attack.

"Yesterday an act of terrorism tried to silence our democracy. But today we meet as normal -- as generations have done before us, and as future generations will continue to do -- to deliver a simple message: we are not afraid. And ourhttp://amsterdamnews.com/admin/news/story/add/# resolve will never waver in the face of terrorism.

"And we meet here, in the oldest of all Parliaments, because we know that democracy -- and the values it entails -- will always prevail."

She said the police officer who was killed in the attack, PC Keith Palmer, was "every inch a hero and his actions will never be forgotten."

May said the current threat level for Britain -- which has been at severe, the second highest, for some time -- would not be raised to critical because there was no specific intelligence that an attack was imminent.

Since 2013, police, security and intelligence agencies have successfully disrupted 13 separate terrorist plots in Britain, she said. "We know the threat from Islamist terrorism is very real. But while the public should remain utterly vigilant they should not -- and will not -- be cowed by this threat."

A tweet from ISIS-affiliated news agency Amaq said the attacker was "a soldier" of ISIS, inspired by its message. However, ISIS has provided no evidence for any direct links to the assailant, whom it did not name.