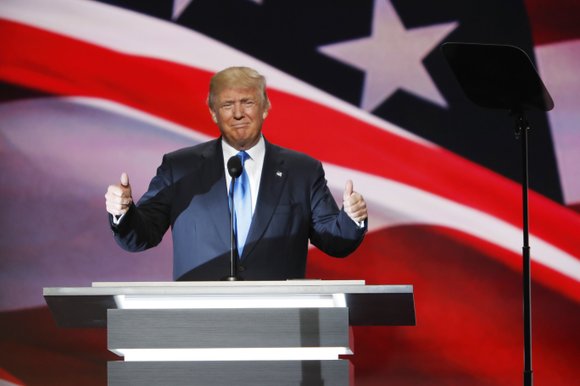 One of the many problems that is causing so much devastation in our inner cities and urban communities is the lack of jobs. Throughout your campaign, you would occasionally reach out to the African-American and Hispanic communities with the question, “What the hell do you have to lose?”

I am sure that many within our communities would answer, “Mr. President, we have a lot to lose.”

President Barack Obama gave many of us a bit of hope, and I am sure that the millions who voted for Hillary Clinton were hopeful that a Clinton administration would continue President Obama’s agenda. Sadly, that did not happen. Paraphrasing one of Muhammad Ali’s famous quotes, Mr. President, “You shook up the world.”

You shook up the world, and now that you are sitting in the Oval Office, please do not forget that you are the president of all the people, even though the majority of African-American and communities of color did not vote for you. Don’t forget that many of them did vote for change and are now hopeful that their communities won’t be forgotten.

Mr. President, I am a felon. I lost my right to vote 43 years ago, when I was tried and convicted of making the mistake of taking the law into my own hands by killing the man accused of raping my wife.

Mr. President, throughout your campaign, I found myself liking your “keeping it real” style of campaigning. Your approach to politicking was vastly different from the norm, and for two years, I found myself glued to the television.

I am one of the guys who did not like the many degrading things you would say about women, and your arrogance would make me want to change the channel, but Mr. President, there was something about your speaking the language of everyday people that kept me tuning in to the Donald J. Trump rhetoric.

So Mr. President, now that you have shocked and “shook up the world,” many of us are now beginning to accept the fact that Mr. Donald J. Trump is now the 45th president of these United States. Jan. 20, 2017, you took the oath of office, and made a vow to be the president to all the people, and I am sure that at that historic moment in your life, your total focus and entire being was to be a man of your word.

You are the commander and chief of this great nation with all its flaws, and I trust that you will fulfill your commitment to the people. The African-American community needs jobs. When a man cannot find a job with wages sufficient to provide a decent livelihood for his family, he will eventually begin to lose his self-respect and his dignity as a man. Once this essential part of our manhood is lost, drugs, prostitution and self-destructive behavior will become the norm.

Education is a significant deterrent to crime. The African-American and Hispanic communities need more funding for our community colleges and vocational training schools. Mr. President, as your administration works to “Make America Great Again,” please do not forget that we, too, need jobs.