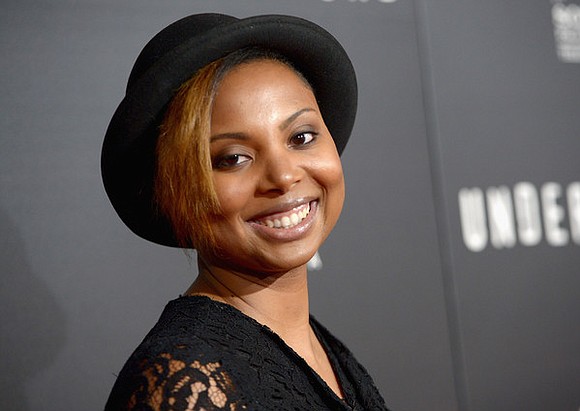 Season two of the 10-episode, hour-long series “Underground” follows an unremitting struggle for freedom within a divided America on the brink of civil war, each side vying to enact their own justice.

“Justice.” That’s a very big word with a different meaning, in this country, depending on where you stand on the racial and economic divide. It’s not an opinion, it’s a statistical fact. In researching the bloody history of slavery in this country, gross injustice is something that can’t be ignored and violence is its evil companion.

Green understands and as a creative is determined to leave a positive and lasting mark by first opening up a dialogue. Clear communication is the key to any conflict resolution, is it not?

To illustrate that point, she and the WGN America network recently teamed with the National Domestic Violence Hotline and the National Suicide Prevention Lifeline for public service announcements that highlighted episodes that run this month.

The simple but powerful PSAs delivered by Green and actress Amirah Vann make no bones about the core of the message around domestic violence and suicide prevention and to that end, provide a resource for viewers who may be dealing personally with these issues. Vann’s character (Ernestine) faces these struggles, which were brought to light in the season two premiere of “Underground.”

“Domestic violence and suicide are two issues that still plague our communities today,” said Green. “Both thrive on isolation, and we wanted to let those at risk know that we see them and encourage them to seek the help they deserve.”

To learn more, go to the National Domestic Violence Hotline where highly trained advocates are available 24/7 year-round to talk with anyone affected by domestic violence. The Hotline provides lifesaving tools, safety planning, immediate support and hope to empower victims to break free of abuse. Resources and help can be found at thehotline.org or by calling 1-800-799-SAFE (7233).

National Suicide Prevention Lifeline toll-free number, 1-800-273-TALK (8255) connects the caller to a certified crisis center near where the call is placed. The service is free, confidential and available 24/7 to everyone in the United States.

Here is a brief excerpt with Green:

AmNews: Why was it important for you to write an episode that centers on violence in “Underground” and to make the PSA?

Green: In Ernestine’s storyline in doing my research, I was reading a lot about what was happening in that time and you could see a lot of parallels [to today] and understanding of where this system of violence began and how it circulated through our communities. And I thought, this is definitely a story worth touching on, and it’s definitely an issue—domestic violence—that is still very prevalent in our communities. I wanted to kind of touch on it to say, “We see you and if you need help we can help you get to that help.”

AmNews: In my home, I witnessed domestic violence, but the police were never called because it could have escalated into something deadly. In your research did you see this in other places?

Green: Yes. I did. I also think that’s where bringing awareness to the issue [helps]. Again saying that we see you because a lot of the times it’s [we] are very hesitant in our communities to call the police. It’s because of situations that we have with police, it escalates to a point that is more dangerous, so I think that’s also a hinderance, but there are outlets and I think that is also one of the things that we wanted to take the opportunity and not miss the opportunity. We’re telling a story with a purpose and not just to entertain people; it’s also to say, “Here’s an issue, let’s help, let’s work,” let’s be active in our activism as our show [“Underground”] always asks us to be.