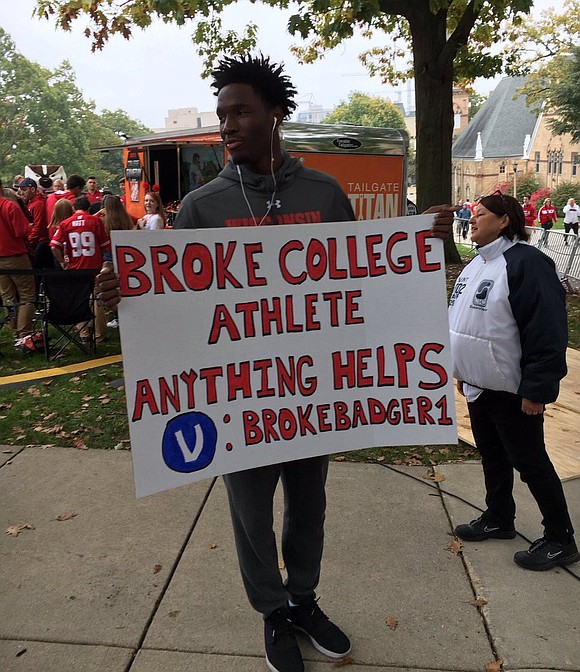 Last October, two weeks before the first game of his senior season as a forward for the University of Wisconsin men’s basketball team, then 21-year-old Nigel Hayes carried a sign on the school’s campus as students and other revelers were partaking in the festive atmosphere before kickoff of the football team’s game against Ohio State.

He was facetiously soliciting financial assistance as the sign in part read, “Broke College Athlete Anything Helps.” Now 22, Hayes, a starter for the Badgers, will take the court tomorrow night at Madison Square Garden versus the Florida Gators in the second game of the NCAA men’s basketball tournament’s East Region semifinals, commonly known as the Sweet 16. South Carolina and Baylor will open the evening as the teams endeavor to be the region’s representative in the Final Four in Phoenix next weekend.

If Hayes and Wisconsin emerge, it will be his third appearance in the Final Four, as Wisconsin made back-to-back trips in 2014 and 2015, a highly successful college career, by any measure, although he and Wisconsin have fallen short of winning an NCAA championship. But the native of Westerville, Ohio, has been integral in helping the university and the conference of which they are members, the Big Ten, reap enormous financial benefits.

The conference reported revenues of nearly $449 million for the fiscal year ending June 30, 2015. That’s close to a half a billion! It’s consistent with the money generated by all of the so-called Power Five conferences, which comprise the Big Ten, Atlantic Coast Conference, Southeastern Conference, Pac-12 Conference and the Big 12 Conference.

Although football is the primary revenue engine, basketball produces huge sums for the conferences and their member schools. Which is why Hayes and many others oppose the long-held paradox that college sports are under the classification amateurism.

The NCAA Tournament, widely known as March Madness, is aptly named for the monstrous television deal the National Collegiate Athletic Association, essentially the governing body for Division I, II and III sports, consummated with CBS/Turner last April. They agreed to extend the original deal inked in 2010, which was a 14-year contract worth $10.8 billion for CBS/Turner to pay the NCAA to broadcast the tournament through 2024, another eight years for $8.8 billion to retain their partnership through 2032. The result is CBS/Turner will pay the NCAA more than $1 billion a year for the broadcast rights to the tournament on the labor of young men who theoretically will not directly receive a single copper penny.

Here’s what’s both at once maddening and laughable. The NCAA is a legally established nonprofit organization. “The @big ten made nearly $450 million. My scholarship is about $160,000. If only there was enough money to pay us…” Hayes tweeted last October.

Those within the NCAA and others who are against players being payed argue most of the revenue generated by men’s football and men’s basketball programs is used to support respective schools’ sports programs, such as bowling, golf and tennis, that produce relatively little revenue and that there would be legal challenges from athletes of those sports programs seeking equal pay if football and basketball players were provided what for all intents and purposes would be salaries.

There may come a day, perhaps over the next 10 years, when athletes will be afforded monies beyond the value of their scholarships, which in a multitude of cases are only partial scholarships and in all cases are renewable on a yearly basis. No athletic scholarship is guaranteed for four years.

For those who will tune in to March Madness, be mindful the student-athletes you are watching are amateurs in name only.