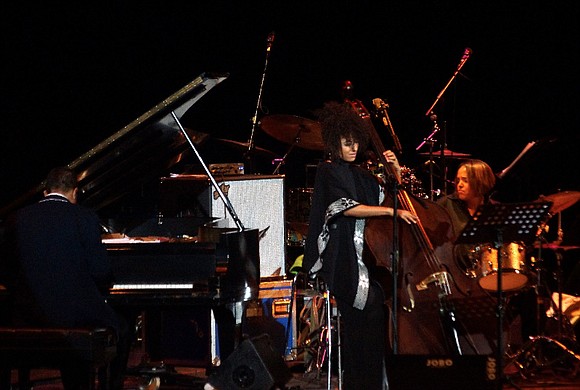 Although most jazz festivals have a difficult time just trying to keep jazz as their focal points, the Panama Jazz Festival, founded by the pianist and composer Danilo Pérez, has the perfect formula that brings music education to students, Panama’s colorful music history and great jazz performances for people of all ages from around the world.

The festival that roared on with stimulated exuberance for four days (Jan. 10-14) was celebrating its 14th year of bringing a meaningful encounter within the jazz paradigm to the Republic of Panama.

The festival was dedicated to Panama’s best jazz singer, Violeta Green. After death, her vocal versatility continues to inspire generations of aspiring musicians around the world.

“Dizzy Gillespie said it’s more important to learn about your heritage than about other things,” stated Pérez during our breakfast interview in the designated festival hotel. “Jazz is where you come from. I wanted more than just a jazz festival. I felt responsible to continue spreading the message of Dizzy and Randy Weston regarding our heritage.”

The Danilo Pérez Foundation plays a major role in these annual jazz festivals. Many of the organization’s young musicians performed during the afternoon, and some graduates, who are now attending the Berklee Global Jazz Institute or the New England Conservatory, performed in various venues and as opening acts on the main stages.

The DPF was established in 2005, but the work and the spirit that personifies its mission goes back 25 years, when Pérez began developing musical programs for education in Panama. “We wanted to create a foundation for underprivileged children, to see if music can change people from violence by getting them off the streets,” said Pérez. “We work with children of gang members, who want their children to have a better life, mothers from extreme poverty to some of the richest families in Panama.”

The base of the foundation’s work is music education. “We are using music as a tool for social change as we establish relationships with our youth in assisting them to become leaders,” stated Pérez.

His jazz club, located in old Panama City, is a part of the students’ musical journey.

Most of the venues were on the land that was formerly Fort Clayton, the headquarters of the United States Army. The base closed in 1999 under the Torrijos-Carter Treaties. The many barracks were reconstructed into residential housing, schools, a minimall and the Ciudad del Saber (City of Knowledge) headquarters.

The festival was a beehive of excitement. Young students scurrying around carrying their instruments taking daily classes, as well as clinics conducted by such accomplished musicians as the drummers Terri Lyn Carrington and Brian Blade, the guitarist Tom Patitucci, the violinist Oryana Racines (Panama), the Latin percussionist Oscar Cruz and the young saxophonist Nzinga Banks from the Berklee Jazz Global Institute.

Dr. Gerardo Maloney, a renowned Panamanian sociologist, filmmaker and writer, inserted video clips for the “history of calypso in Panama.” Lord Cobra, born Wilfred Methusiel Berry Gonin, infused his Panamanian imprint to the sound of calypso, a reputation that followed him from his native land to New York and Europe. Also discussed were highlights of Green’s significant contributions.