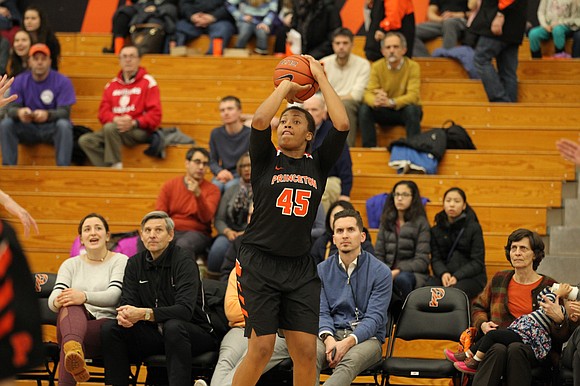 Princeton exited in the first round of the postseason WNIT, but junior forward Leslie Robinson looks toward next season. Beverly Schaefer

Postseason isn’t the prettiest of pictures for Division I women’s basketball teams from New York and New Jersey. Not a single team qualified for the NCAA Tournament. All is not lost; some had good enough records to make it to postseason play in the WNIT.

Obviously, not all programs can sustain success like the University of Connecticut, which is currently on a 108-game winning streak and in pursuit of an unprecedented fifth consecutive national title. Despite the graduation of three dominant players—Breanna Stewart, Moriah Jefferson and Morgan Tuck, the top three picks in the 2016 WNBA draft—the Huskies keep on winning.

Although not in the same powerhouse league as UConn, Rutgers University has a long and impressive history under coach C. Vivian Stringer. This year, the Scarlet Knights were 6-24 overall and went 0-14 on the road. Maybe it’s time to take a hard look at the program and make some unwelcome but necessary changes.

It was a rough year for Seton Hall University, which saw postseason action during Tony Bozzella’s first three years as coach. The 12-19 Pirates will graduate only a couple of players and should come back strong next year.

All local news isn’t bad. Iona College had a good season, but 18-13 overall brought the Gaels’ season to an end at the MAAC Tournament. Army had a 22-9 record, but a loss in the Patriot League tournament finished the season.

Other programs, such as LIU, Wagner and Manhattan, seem stuck in a losing rut, where as St. Francis is looking to recapture the magic that brought them to the NCAA Tournament in 2015.

That leaves St. John’s as the only Division I women’s basketball team still in action as spring begins. The Red Storm trounced Sacred Heart University 72-43 in the first round and squeaked by Harvard University 62-57 in the second round to advance to face University of Michigan in round three.