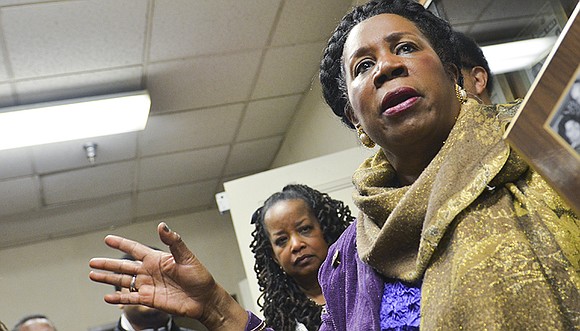 WASHINGTON, DC—On a day that honored a stalwart of the Black Press and saw a liaison of the Trump Administration walk out on a breakfast with members of the Black Press, it was the words of Representative Sheila Jackson Lee (D-Texas) in a university library that rang the loudest.

Rep. Jackson Lee delivered remarks on March 23 in memory of Lenora “Doll” Carter, long-time publisher of the “Houston Forward Times,” who was just enshrined in the National Newspaper Publishers Association (NNPA) Gallery of Distinguished Publishers at Howard University’s Founders Library. The enshrinement ceremony is one of the signature events of Black Press Week, an annual celebration in Washington, D.C., attended by NNPA members, partners, sponsors and Black Press contributors.

The NNPA is a trade group of more than 200 Black-owned media companies operating in 70 markets in the United States.

During her impromptu talk after the enshrinement ceremony, Jackson Lee dropped a bombshell. In talking about the nation’s current president, Jackson Lee minced no words.

“This is not a government, right now,” said Jackson Lee in front of nearly 50 members of the Jackson Lee added: “I’m on the route of impeachment.”

Jackson Lee said there are a litany of reasons that should disqualify President Donald Trump as president including his potential ties to Russia and its interference in November’s election, but she also said America is unsafe under Trump.

Jackson Lee’s statement rang loud, because she is also a member of the House Judiciary and Homeland Security Committees.

Some have expressed concerns that an impeachment of Trump would leave the nation under the control of Vice President Mike Pence, who is seen as a staunch conservative with far right-wing views. Jackson Lee does not share in those concerns.

“At least he understands government,” said the Texas representative. “And I’m focused on getting him (Pence) out in 2020, anyway.”

Carter, who died in 2010, also served as the treasurer of the NNPA. She was remembered as a powerful businesswoman and a loving friend.

Colleague and close friend Dorothy Leavell said Carter lived up to her nickname.

Insight News is a member publication of the National Newspaper Publishers Association. Learn more about becoming a member at www.nnpa.org.