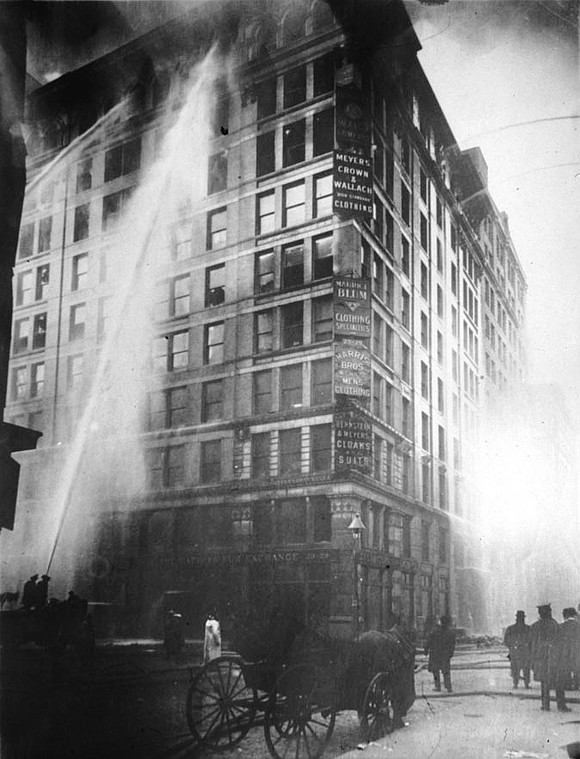 Last Saturday, labor leaders and community members gathered to honor the 106th anniversary of the Triangle Shirtwaist Fire. The ceremony took place outside of New York University’s Brown Building in Greenwich Village, where 146 workers lost their lives in 1911.

The crowd also heard from several union leaders on the significance of the anniversary.

“We are gathered at the site of one of the most horrendous workplace tragedies in our nation’s history because 106 years later, more work must be done,” stated Edgar Romney, secretary-treasurer of Workers United SEIU. “As worker advocates, we must continue to stand together to fight for the protections and safety standards needed to protect all working men and women.”

“The Triangle Fire was both tragic and avoidable,” added Vincent Alvarez, president of the New York City Central Labor Council, AFL-CIO. “One-hundred-forty-six workers died that day because profits were deemed more important than safe working conditions and the lives of workers. The safety regulations borne of this tragedy continue to help protect workers, but we must remain vigilant to ensure that all workers have the training and equipment needed to keep them safe on the job.”

New York Community Alliance for Workers Justice also used the occasion to advocate for the passage of Intro 1447 in the New York City Council. “Safety is still an issue on our job sites today and we hear stories every week about injuries and accidents,” read a statement on the group’s Facebook page. According to New York City Council Member Carlos Menchaca, Intro 1447 would establish protections on construction and demolition sites by requiring additional health and safety training and qualifications, orientations and “industry best practices.”

Part of the proposed legislation also amends section 3310 of the Building Code that requires workers at major building sites to be “a registered apprentice or graduate of an apprenticeship program registered by New York State or United States Department of Labor in the trade for which such worker is employed—or an experienced, trained and skilled person that has received training commensurate with that required for registered apprentices, including related instruction and on the job training, in accordance with the standards set forth in section 815 of the New York State labor law.”

Back at the rally, relatives of those who died in the fire and current workers spoke to attendees.

“I worked as a safety fire consultant, but was routinely told not to call the Department of Buildings, OSHA or site safety when there were problems,” stated Thomas Roumbakos, a member of the NYC Community Alliance for Workers Justice. “Workers were forced to put themselves and everyone else in danger because the boss wanted to save money. Workers deserve better, and we are looking to our local elected officials to stand up to protect us.”

“Too many employers want to put profits over the health and well-being of workers; it happened in 1911 and it’s still happening today,” added NYC Community Alliance for Workers Justice member Edgar Melendez in a statement. “Working people need and deserve more, and now is the time to take a stand to protect workers by requiring safety training and safety equipment, and by holding bad employers accountable for the conditions on their job sites.”