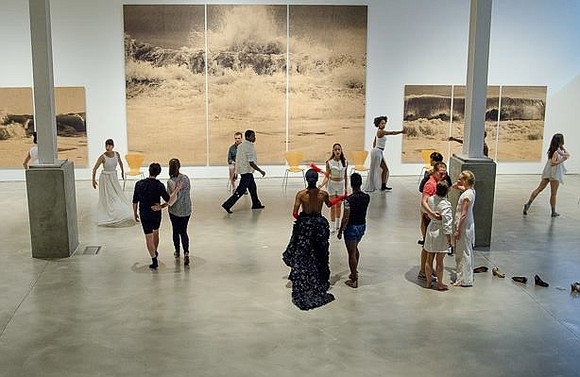 Fasten your seat belts. Beginning Friday, March 31, and running through Saturday, April 8, under the banner E-Moves 18, HarlemStage presents a diverse roster of emerging, evolving and established choreographers and dancers of color who can best be described as outspoken and exciting risk-takers.

The program, curated by a team that includes the Amsterdam News’ own Charmaine Warren, features an eclectic selection of artists. Among them is Francesca Harper, an internationally acclaimed multifaceted artist whose work has been described as “emotional, timely and necessary.” India-born, U.S.-raised choreographer Parijat Desai offers a special blend of contemporary dance that has been described as “crossing boundaries of culture, identity and nation through dance.” Kyle Marshall navigates the beautifully complex spectrum of Blackness through dance. Leyland Simmons makes ballets that break from the classical mold and explore dramatic, controversial

issues. But that’s not all.

Joining them with what has been billed as “Pop Up” performances are several dance favorites that are considered part of the E-Moves' family—Dormeshia Sumbry-Edwards, Ronald K. Brown/Evidence (dancer, Annique Roberts), Dance Theatre of Harlem and Bill T. Jones/Arnie Zane Dance Company (dancers, Antonio Brown and I-Ling Liu).

All performances reflect a passion about dance and its ability to communicate messages that first bypass the head and aim straight for the heart before inspiring provocative thought. Warren said, E-Moves, roster of artists “love dance, love to share dance and, because they must be heard.”

Works range from Francesca Harper’s work-in-progress entitled, “(y)our story,” which will draw on audience participation, to Brown’s work pulsating with a strong, spiritual and communal vibe, “She Is Here.” Harper said her piece was inspired by the political and social climate that thrust the Black Lives Matter movement and the 2016 presidential election into the center of our national conversation. “Not only can I talk about the African-American experience, but having grown up in New York and lived in Europe, my experience has been very multicultural,” said Harper.

Not only does this new work, “take the next step with race relations and communications”, but it incorporates the life stories of her company and members of the audience. Harper said she started “investigating autobiographies as a way to explore our connections and our differences.”

Ron K. Brown/EVIDENCE will be represented at HarlemStage by veteran Roberts performing a work premiered last year, “She Is Here.” In the 30-plus years his company has been in existence, Brown has honed a warm, fluid style that merges African, African-American and other dance to mold powerful movement statements grounded by strong spiritual and cultural ties to the African Diaspora. “She Is Here,” Brown explained, continues that tradition. The solo has been mounted on all the women in Brown’s company and is devoted to “honoring our female ancestors and celebrating the fact that even though they have transitioned, they are with us providing the energy we need to do what must be done.”

Curator Warren said all of these artists were chosen because “each of them loves dance, loves to share dance, and because they must be heard.” For that reason, they are here for you. Enjoy the show!