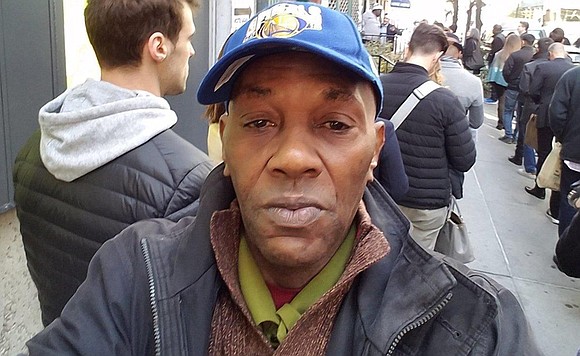 Ever since the presidential campaign of Donald Trump and the racist rhetoric he spewed, there has been a noticeable increase of white nationalism in the U.S. And we may have witnessed a disgustingly violent manifestation of it last Monday when sword-wielding James Harris Jackson butchered Timothy Caughman on the streets of Manhattan.

Although there is no direct link between Jackson’s racially motivated slaying of Caughman, a 66-year-old Black man, a can and autograph collector, and Trump’s demagoguery, there is a climate of hate Trump has authored that might push a white supremacist to violence.

By his own admission, Jackson, 28, came to New York City from Baltimore with the expressed intention of killing as many Black men as possible. Caughman, according to the police, was a dress rehearsal, a warmup for larger mayhem Jackson had in mind in Times Square. Jackson said he came to New York City for his murders to get major media coverage. He had also tried unsuccessfully to recruit others in the targeting of Black men.

Jackson, who surrendered to the police Wednesday, was arraigned the next day in Supreme Court in Manhattan and charged with second-degree murder as a hate crime. He is being held without bail. Those familiar with him said his behavior had been erratic since his discharge from the military.

During his arraignment, Jackson showed no remorse and sneered when the charges were read by Joan Illuzzi, the prosecutor. According to the prosecutor, Jackson was particularly incensed when he observed Black men with white women. Even so, he turned himself in after seeing a mixed couple. Illuzzi said the charges against Jackson may include murder in the first degree because “this is an act, most likely, of terrorism.”

Caughman, who was collecting cans when he was slain, had worked in anti-poverty programs in Queens. But along with collecting cans and bottles, he was also an autograph seeker of celebrities. His daily routine stood in stark contrast to the vicious intentions of his assailant.

It’s hard not to place Caughman’s slaying in the context of the rise of white nationalism and white supremacist organizations. They have been popping up with increased regularity since Trump’s ascendance, and the rise of these organizations is accompanied by bomb threats to mosques and synagogues across the nation.

Mayor de Blasio seems to feel there is a connection between Trump’s rhetoric and Jackson’s brutal act. He said there was a “dynamic of hatred” growing in America that “is clearly related to the rhetoric of Donald Trump and even other candidates during the presidential election.”

The mayor’s feelings are supported, at least as they pertain to the rise of white nationalism, by Yale University lecturer and contributing editor for U.S. News & World Report, John Stoehr. “The fact remains,” he wrote, “that most Americans are immune to the dangers, or blind to the existence, of white nationalism. They are white. Because it takes majorities to win in politics, the Democrats will need to convince a majority that white nationalism poses a clear and present danger to all.”

He concluded, “Thanks to Trump’s incompetence, the task is made less challenging.”

Thus far, the president has tweeted nothing of substance about the recent attacks and killing of men of color.