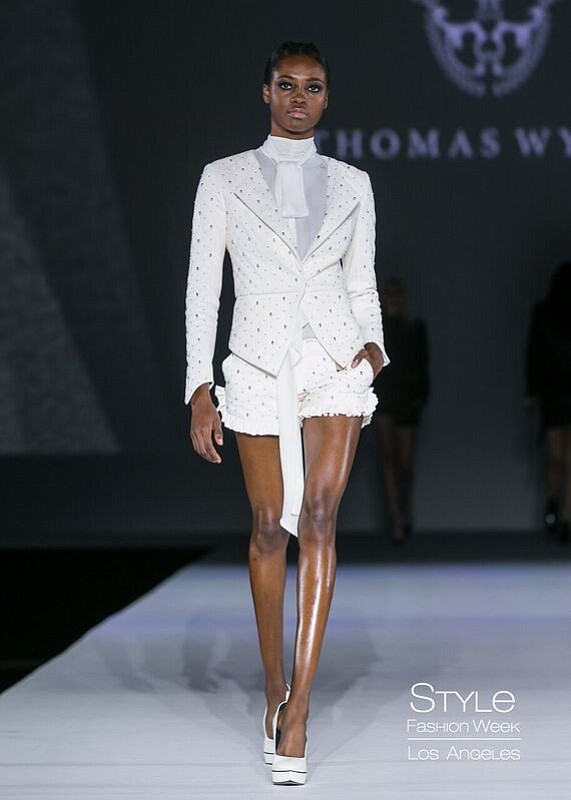 In L.A., Style Fashion Week was unforgettable. Clothes were modern. The combination of music, performance and art enhanced the event, held at the Pacific Design Center. The show kicked off with a jam-packed opening reception at Skybar at the Mandarin. The party set the bar for the record-breaking crowds. Inspired by 1930s glamour and the dark film noir era, designer Malan Breton’s

Honee’s designs were colorful, yet sexy and sophisticated. The looks were pieced together with attractive accessories, including wide-brimmed straw hats. There were fan-sleeves, two-toned dresses with thigh-high splits, sleeveless looks, pantsuits, tunics, sunsuits and gowns. Her clothes seemed to be costumes, and all of her model’s faces were painted white with makeup, resembling ensembles from the movie “Madame Butterfly.” The audience enjoyed Honee’s intricate designs. Her colors

exploded on the runway.

One of the best collections was shown by Thomas Wylde for Albert B. from Worchester, England. This line was extremely stylish from head to toe. The high-heeled steppers worn by their superb models lifted the collection to another level of fashion.

Later in the evening of the final day of Style Fashion Week, Cirque Du Soleil’s Zumanity stunned the crowd with jaw-dropping acrobatics from a single hoop artist. Jeff Timmons from 98 Degrees performed for the crowd, taking everyone back to the 1990s. A musical performance from JP Vance entertained the crowds with his impressive vocals.

In Scottsdale, Ariz., Versakini delivered a flirtatious line. Their collection was full of neon and bright prints that quickly became the showstoppers of Scottsdale Fashion Week. The collection was filled with incredible patterns and two-toned pieces. The company is known for their multiuse bikini tops. The designer’s use of fresh-faced models captured South Florida’s youth culture. Both hair and makeup looks were simple all-around, yet they still made a style statement. The biggest highlight was

Versakini’s bold use of lip colors.

Versakini is inspired by the natural beauty of a versatile woman. Each piece is uniquely styled in multiple ways. Their mission is to offer women many looks. Their new “Goddess Top” was featured on the runway, illustrating their one-of-a-kind versatile design.

During the show, the models showed off how to work minimum pieces for maximum use. Each swim suit floated down the runway showcasing its own signature. With its splash of psychedelic designs, varying bikini styles and delicate mesh details, their collection came

together for a vibrant show!