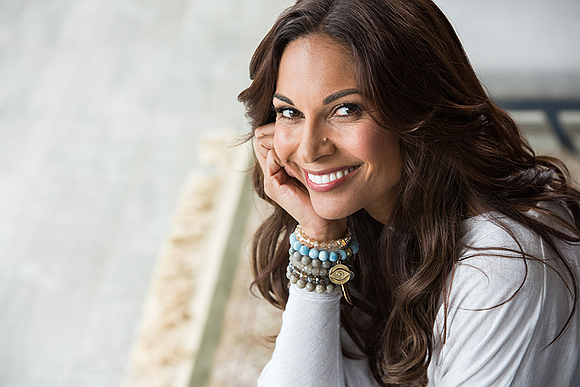 While acting in one of Ava DuVernay’s first films the striking actress, Salli Richardson-Whitfield, got the first clue that working behind the camera might be in her future.

“I was acting in one of Ava’s early works and I had a lot to say, I mean a lot to say,” remembered Richardson-Whitfield. “I recall Ava telling me that maybe I should direct, that my personality would be suited for the director's job.”

When you do a Google search and insert the name Salli Richardson-Whitfield, you will find images of a beautiful, confident actress because as an industry veteran she’s been slaying in the game for 30 years. That is a lot of acquired knowledge. She’s graced the screen in more than 20 major motion pictures and shared significant screen time with some of Hollywood’s most esteemed thespians, including Samuel L. Jackson in “The Great White Hype,” Denzel Washington in “Antwone Fisher” and Will Smith in “I Am Legend.” For die-hard sci-fi fans, she is best known and admired for starring in the Syfy

“Eureka” is also where she got the opportunity to step behind the camera and sit in the director’s chair, starting her directing career with two episodes. Word-of-mouth about her skills grew, and she quickly added back-to-back episodes of DuVernay’s OWN series, “Queen Sugar,” and an episode of “Shadowhunters,” and on her 2017 “to-do list,” she will be directing two episodes of the BET series “Rebel,” as well as episodes of STARZ’s “Survivor’s Remorse,” ABC’s “Scandal” and Freeform’s “Stitchers,” in which she’ll also return to her starring role for

Richardson-Whitfield is making the right moves in Hollywood, and as a prolific producer her credits include the made-for-TV movie “Teachers,” which was featured on Magic Johnson’s network Aspire. She also co-produced the uplifting Lifetime film “Pastor Brown.”

Here is an excerpt from an interview with wife/mother/actress/producer and director Richardson-Whitfield.

AmNews: I know you work as an actress, so I did a double take when I learned you were now directing for television. According to industry statistics, in television, 91 percent had no women directors. Your achievement is tremendous.

Salli Richardson-Whitfield: Thank you. I credit Ava DuVernay for planting the seed in my head, almost 10 years ago. She teased me [on that set] and challenged me—“You want to direct?”— and somewhere the question stuck. So when she hired me to direct two episodes of “Queen Sugar.” it was a very special moment.

AmNews: How did you become so good behind the camera?

Salli Richardson-Whitfield: Great question. First, I have worked in front of the camera for a long time. But I had the opportunity to shadow some great directors, a key to being taken seriously. The team behind “Eureka” really spoke up for me and I shadowed.

AmNews: To shadow a working director is important. Did you also participate in a directing program?

Salli Richardson-Whitfield: Yes, I did participate in the Sony Directors’ Program and it was a hidden blessing for many reasons. Participating in a program sends the signal that you are serious about the grunt work of directing. It was also an executive [in this program] that remembered me and helped me lock directing [an episode] of “Underground.”

AmNews: There is nothing typical about “Underground” and under director/executive producer Anthony Hemingway’s careful eye, every episode delivers something new. You directed episode 204, which airs March 31. Explosive and unexpected.

Salli Richardson-Whitfield: Anthony has a style and as a director it was exciting to be part of that team. My episode is 204.

AmNews: Why do you feel women make great directors?

Salli Richardson-Whitfield: We are great multitaskers. I’ve been working on set and between takes. I call home and help my kids with their spelling. Women do everything with heart and our stamina—I mean, you know? And women we don’t forget nothing—nothing—nothing! Nothing!

To learn more about “Underground” on WGN America, visit www.wgnamerica.com/series/underground/.