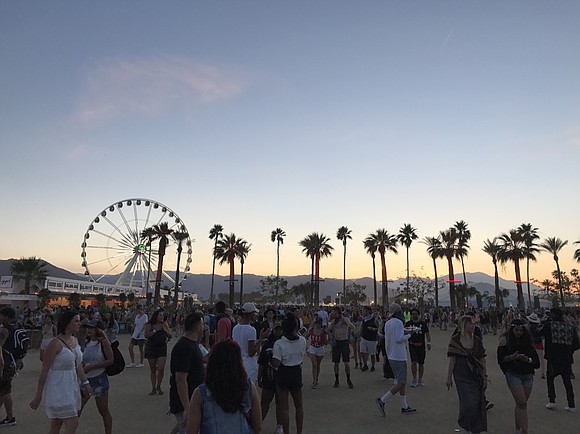 One of the biggest music festivals of this generation concluded part two this past week in the middle of the desert, two hours east of Los Angeles, in Coachella Valley. Spread across what is usually a cluster of luxury polo fields, the festival is a two-weekend, three-day dance party with live performances from the biggest names in pop, hip-hop and electrical dance music. These performances far outweigh most other outdoor concerts because unlike those festivals—held on a gigantic standard stage in some local park or some street intersection—this festival has stages that are run by people with skills from Hollywood and Silicon Valley.

Each of the eight stages is designed to be distinctively different. Some are nearly enclosed, and others are complete open-air venues. Artists who would naturally garner the biggest crowds—Lady Gaga, Future and Kendrick Lamar—performed in the open-air venues, whereas DJs and EDM performers made great use of the enclosed venues. I considered the tents and domes to be the most fun because they gave you a multitude of sensory-numbing experiences through light and sound.

In conjunction with the good music and a killer view (there’s the surreal sight of a massive Ferris wheel in between rust-colored mountains and a line of giant palm trees), there is good food and a surprising number of options. The festival offered everything from burritos and poke bowls, to grilled cheese and fried chicken. There were places to grab a quick bite and places with more of a restaurant feel. There were also popsicle stands, juice bars and even a place to order acai bowls.

But don’t let the perfectly constructed productions and well-thought-out site fool you. The festival is gritty. It takes place in the middle of the desert, which means, more than likely, the climate will be vicious. The days are long and hot, and the nights are cool and windy. Sand storms are known to happen without a moment’s notice, causing pain anywhere bare skin is exposed. Once the sand has settled, it’s still in the eyes and mouth of everyone not wearing a bandanna.

I’d be lying if I said festivalgoers allowed the climate to affect their outfits. Of course, it would be smart to bring layers to keep warm when the sun sets, but for the most part, anything goes when it comes to dressing for Coachella. Most people stick to a bohemian or desert theme, but tons of people throw on whimsical costumes and don eccentric makeup and face jewels. Coachella is a place to feel free and let yourself go. Your outfit is the perfect place to start. My only advice is don’t make the same rookie mistake I did and wear brand-new shoes. You have to do a ton of walking and any shoe that isn’t “broken in” will kill your feet.

The festival is not just a music festival. The Coachella Valley Music and Art Festival is home to original large-scale art installations by both established and up-and-coming artists. The art takes the form of landmarks for festivalgoers, as it is impossible to miss. Every year different artists create completely different pieces, making each installation a distinguishing memory of each individual year.

If you live anywhere other than California, planning a trip to the festival is challenging but totally doable. First, you should decide which airport you want to fly into. The Palm Springs airport is the best option because it’s approximately 45 minutes from Indio (where the festival grounds are located). You could also fly into Los Angeles International and spend a night in the city, or take a shuttle straight to Coachella Valley— $70 for a one-way ticket.

Once you decide where you’ll land, you should then decide on where you plan to spend your nights. There are four practical options. The first is rent a tent from the festival and camp glamorously (glamp) on-site! Each tent sleeps two or four people and there are two glamping sites. The Eldorado site is made up of tee pees and cots on a lake, and starts at $2,398 for two people with access to general admission. The Safari tents are much more glamorous with actual beds, air conditioning and an access to a private lounge that offers breakfast and late night food. Those tents start at $7,500.

The second option is to set up your own camp on the grounds of the festival. For the cost of only $113 you could opt to set up your own campsite. The catch is you’re responsible for everything you will need for the weekend, down to the toilet paper. The third option is to sleep in a hotel in one of the nearby cities and pay $75 to catch the shuttle bus for the weekend.

The final option is to rent a fabulous house in Palm Springs and drive about 45 minutes to the festival, which is exactly what my friends and I did. Although this option gave us much more flexibility and the opportunity to make different memories, there is a reason people choose to camp out. The walking distance from your car in the day parking lots to the actual festival grounds, and vice versa, is easily 2 miles.

General admission weekend passes for the festival start at $399 and can be found on the festival’s website. But they usually sell out the day they go on sale. If that happens before you are able to make your purchase, don’t get discouraged. Tickets are resold on sites such as StubHub and Craigslist. Tickets can even be found on Coachella Facebook group pages. If you do plan to buy from an individual rather than a ticket resale company, try to do it in person so you can register your pass with the individual, or send money through a company such as PayPal, which can insure your transaction.

world and writing about it.