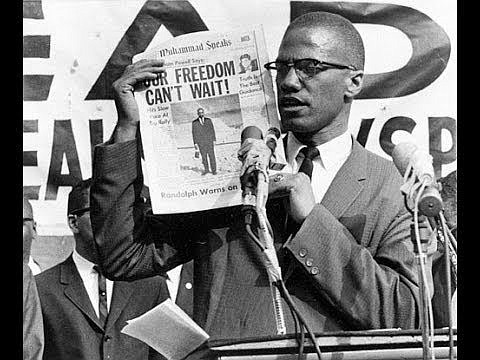 It’s hard to believe that attendees at the screening of Lebert “Sandy” Bethune’s film, “Malcolm X: Struggle for Freedom,” Sunday, May 7, at Lincoln Center’s Elinor Bunin Munroe Film Center will acquire as much knowledge as Bethune dispensed during his recent appearance at City College.

For nearly two hours, Bethune enthralled students in a course on Malcolm X with his personal reflections of his encounters with the great leader in France and Britain in 1964 and 1965. Much of what he recounted appears in an essay published in “Malcolm X—The Man and His Times,” edited by the late Dr. John Henrik Clarke. The instructor copied and shared the essay with the students, so to some extent they were

prepared for his remarks.

“We had all been sitting in a room listening to the music of John Coltrane when one of our friends rushed into the apartment and whispered breathlessly that Malcolm X was in town,” Bethune told the students. “We quickly gathered ourselves and hurried to the apartment where Malcolm was waiting. We had no idea what we would say to him, or what he would say to us.”

That moment occurred in Paris Nov. 23 and 24, 1964, after Malcolm had visited North Africa and the Middle East, and most importantly Mecca. Bethune and his comrades calmed their excitement and began a conversation with Malcolm. “Malcolm smiled at our questions, answering most of them with parables and adages; others he replied to with silent laughter,” he wrote.

Bethune, of Jamaican ancestry but who has been living in New York City for a number of years since his days in Europe, is a marvelous storyteller, and the students peppered him with questions in the same way he and his friends had sought answers from Malcolm. “But we didn’t ask him about the problem that forced his separation from the Nation of Islam,” he said. He did have an opportunity to take Malcolm on a tour of Paris and later spent time with him when Malcolm returned on a second trip and was in England, where Malcolm was invited to debate at Oxford.

What attendees to Lincoln Center will receive—and what the students did not see—is the 22-minute film Bethune made of the meeting in the Paris apartment. Some of that archival footage has been made available to other filmmakers, including Karen Thorsen for her documentary, “The Price of the Ticket,” on James Baldwin.

Bethune’s film and his recollections fill an important phase of Malcolm’s political evolution, all of which would make a very engrossing book, should he get around to it. Meanwhile, he will be at Lincoln Center with his film and memories, as well as another of his films, “Jojolo.”

“I wanted to portray a facet of Black female identity, seen through the eyes of a young Haitian woman working in Paris in 1966, as a Dior fashion model and actress,” Bethune said, explaining the film.

Although Bethune, or Sandy as he prefers, has been living and teaching in the state for many years, this event is a rare opportunity to hear his scholarly erudition and about his fond memories of Europe, when Malcolm was at a very interesting plateau of this international development. It was also a time when Bethune was an energetic filmmaker, poet and raconteur.