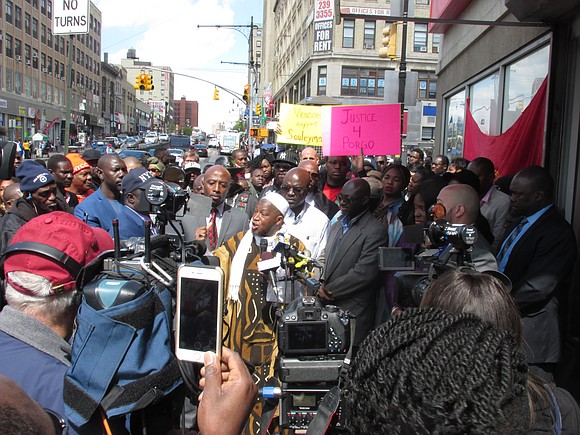 Community leaders, elected officials and advocates in the South Bronx sent a stern message to police as well as the suspect who allegedly attacked a vendor who was stopping a purse snatcher.

Reports indicate that 21-year-old William Burgess surrendered to police after his face was shown on a cellphone video attacking 53-year-old Souleymane Porgo while he was stopping Burgess from stealing a woman’s purse.

In the shocking video that has made its way around social media, Burgess can be seen punching Porgo along with others. Porgo eventually hit the ground and Burgess again punched him, leaving him unconscious. Married and a father of two, his family said he opened his eyes as he continues to fight for his life.

As Porgo is a native of Burkina Faso, West Africa, representatives from African organizations have been vocal on the attack.

“The children are really traumatized,” said a spokesman for the family. “We are just asking for peace and justice. What happened to our brother could have happened to anybody.”

A few onlookers in the video are seen egging on the attack, and no one is seen helping Porgo. Others are seen filming the entire incident and not getting involved.

Porgo was taken to nearby Lincoln Hospital where he is in critical condition with a fractured skull and bleeding in the brain. Part of his skull had to be removed during a surgery he had Tuesday.

Burgess was charged with gang assault. Police are still looking for four other people wanted in the attack, including 18-year-old Enrique Foote.

The attack unfolded at East 149th Street and Third Avenue in the Bronx, known as “The Hub.” The area is often busy with shops and numerous street vendors as well as a major public transportation stop for both subways and buses. While there is a police presence in the area, many say there isn’t enough considering the high foot traffic.

At a news conference organized by the African Advisory Council held Tuesday at the spot where Porgo was attacked, fellow vendors, advocates, community leaders and elected officials called for justice along with asking for better safety in the one of the city’s busiest intersections.

City Council Member Vanessa Gibson said she represents many West African families in District 16 in the Bronx. Her uncle is also a street vendor.

“We know that while this happened to one of our brothers, it could have been any of us,” she said. “This could have been my uncle, or my brother or my father. We must continue to pray. As a community we must always be united in the good and the bad times. We will not allow this incident to define who we are as people.”

City Council Member Rafael Salamanca said that when he inquired about the lack of officers in the Hub he was told there were vacancies in the 40th Precinct where officers would come from. He was also told that 32 officers graduating from the current police academy are coming to the area.

“This specific location in the Third Avenue Hub is the second location with the most foot traffic after Times Square,” said City Council Member Rafael Salamanca. “We have vendors here who are vending with licenses. They need protection, and it’s our responsibility as elected leaders to provide that service to them. It is unacceptable what is happening.”

Charles Cooper of the African Advisory Council said that because police are not giving proper priority to the area citizens should help as well.

“Law enforcement is going to do their part, but we ourselves must share information,” he said. “We must be forthright and open with law enforcement information that we hear to bring these perpetrators to justice. This is our Bronx.”

A GoFundMe page has been created to help Porgo’s family by the Street Vendors Project that has raised more than $26,000 as of Wednesday. To donate go to www.gofundme.com/support-for-souleymane.