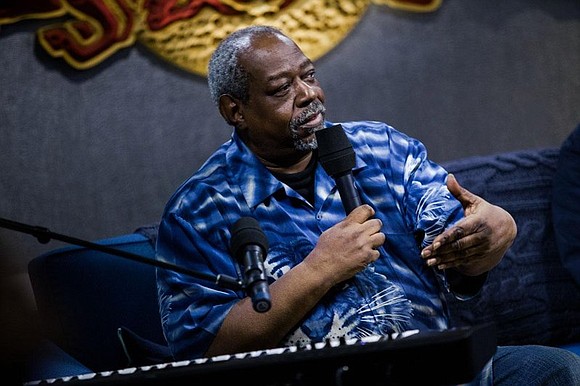 Musician, arranger and synth player extraordinaire Patrick Adams returns to the Red Bull Music Academy Festival NYC to curate a two-hour concert of his greatest hits, selected from the catalog of more than 1,000 songs he’s been credited with working on.

I was personally interested in hearing his wisdom about succeeding for several decades in his craft, which dates back to his work in the Sparks in the 1960s, places him as a synth pioneer and disco producer in the 1970s and a collaborator of young hip-hop such as Salt-N-Pepa, Eric B. and Rakim in the 80s, right up to the present time.

Adams spoke with the AmNews via phone about the music industry, his personal path of working in different genres and facets in music, and what he plans to do at the festival. He’ll be performing May 11 at 2116 Adam Clayton Powell Jr. Blvd. in New York City.

AmNews: You of course, have had a long and healthy career in the music business. What can you say about your goals when you first started in the business?

Adams: I’ve always tried to learn as much as I could about my craft and about the arts. I tried to conquer many different genres of music. Matter of fact, one of my complaints over my lifetime is that people have tried to put labels on me. When I started out, we had a four-piece, self-contained Black band called The Sparks (in the 1960s). We were like “The Black Beatles.” We played The Young Rascals, Jimi Hendrix and a lot of pop stuff, but at the same time we played R&B, The Temptations and Motown as well. We were versatile.

But in the middle ’70s, I started running to this problem where people would say, “Oh, he’s a great R&B writer, but he can’t do disco. For a two- to three-year period, I was making a lot of money as musical arranger working with a whole slew of artists, but people were not hiring me to produce records. I worked to knock down the notion that I was only an R&B producer and as fortune would have it, Prelude Records gave me a shot. It was under the best circumstances because all they said was, “We want a disco record.” Marv Schlachter (Prelude’s founder) asked, “How much is it going to cost?” I gave him a number, he wrote a check and three weeks later I had done the “Keep on Jumpin” album. Not wanting to be pigeonholed if the album was a success, I named the project, “Musique.” I said, “It’s music, so we’ll call it Musique.” The album was a surprise hit.

AmNews: After becoming successful as an innovative synthesizer player and conquering disco, what did you end up doing next?

Adams: In the ’80s, I became the chief engineer at Power Play Studios in Long Island City. Herbie Love Bug came into the studio and said, “Can you produce my group?” Instead of taking title producer, I told him, “You’re going to produce the record, I’ll help you, but you’re going to produce it.” He had brought me the group Salt-N-Pepa. Same thing happened with Eric B. and Rakim. They were looking for a producer. I didn’t try to grab the title. Had I been about making money alone, I would have taken credit as a producer on those projects, whether they were successes or failures, just to have gotten my name out there as much as possible. I had no idea those groups were going to blow up and sell millions of albums.

AmNews: Do you regret not taking the producer credit?

Adams: Of course, there is an element of regret. I would have been Dr. Dre 10 years before Dr. Dre was Dr. Dre.

AmNews: It seems like your career didn’t take a very straight path. Like you put on many different hats as an arranger, musician, songwriter and producer.

Adams: When I was 12 years old, I had the notion that I wanted to be a record producer. I didn’t really know what a record producer did, but I grew up in an era where studiousness and attention to detail and knowledge was rewarded. If you put in the work, the reward would come. If you had talent and did the homework, you would eventually rise to a level of comfort and success. Life is not like that now. We’re in a time where it seems like everybody knowing who you are, regardless of what you do or don’t do ... Now, anyone who has a computer and buys a $100 of software can call themselves a producer. Everyone is not going to be a rap star or TV reality star.

AmNews: Maybe because of your attention to detail and professionalism you’ve gotten the opportunity to collaborate with Red Bull Music Academy. I think when you get so big and your career is all about being seen, you miss prestigious if not intimate opportunities to do concerts and in conversations.

Adams: The thing I like about Red Bull Music Academy is that they are dedicated to keeping things alive. I did their lecture series in 2013, and because of my credits, they put me in a book called “For the Record,” which they called conversations with people who formed the way we listen to music. It was a brilliant idea. You take an established artist, which would be the equivalent of a master, and a new artist, which would be the equivalent of a producer, and you put them together and let them have a conversation. That became a chapter in the book.

Even with all the talent in the world, if you don’t study the craft and try to learn from the masters who came before you ... when you look at Michael Jackson, and people to rose to the height of success, a lot of it was talent, granted, but a lot of it was study. You can look at Michael and say, “He got that move from Sammy Davis Jr.” Or the way he pronounced his words, he sang clearly—his ultimate success came from him being hooked up with Quincy Jones. Quincy Jones is one of the best producers of our lifetime. I’ve always said, I want to be the Quincy Jones of the next generation. I want to be thought of as someone who could do anything and someone was good at everyone who did.

AmNews: I’d like to step into the present and ask, with over a thousand credits under your belt, how are you going to put together a two-hour concert for Red Bull Music Academy Festival?

Adams: Interestingly enough, the challenge was choosing the music. We’re going to have live musicians, there will be a core rhythm section, and then we’re going to have string and horn players. We are bringing in Black Ivory and some other great singers, and we’re talking to several people right now. I want to start the show with a medley of songs as an introduction. Then different acts will come in and do full songs live.

AmNews: How do you feel about music today? If you consider there to be pitfalls in music today, where do you think the problem began?

Adams: Greedy people. Back in the ’80s, which some people call the “me generation.” The same attitude that lead to the corporate raiders on Wall Street hit the music industry. The Republicans said, “If we give tax breaks to corporations, they’ll have more money to hire people.” But that’s not what happened. The corporations bought other corporations and took the money. It was no longer about art or the quality of the music, it became “Give me a song like the other one.”