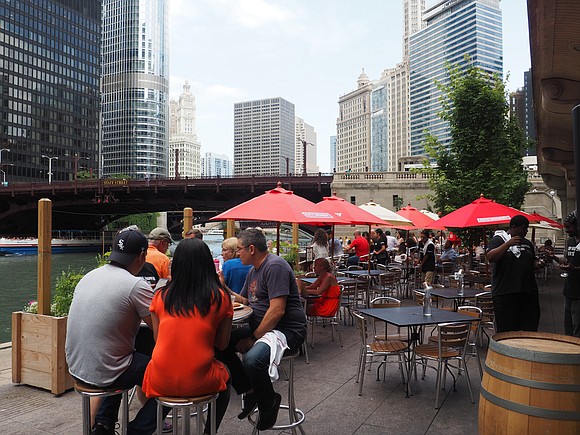 Having to face such brutal winters every single year forces residents of the Windy City to take full advantage of every single moment during its summers. For those few months, the city is bursting with activities to enjoy the great weather outdoors.

One of the things that makes Chicago so unique is its nearly mile long pedestrian Riverwalk, located on the Chicago River. The walkway began construction in 2001 and has since given visitors and natives alike a place to run, walk and grab a bite to eat with a view. It is the best way to enjoy the river—if, of course, you can’t find a way to relax on a 30-plus foot yacht.

The Riverwalk truly is the perfect place to spend a few hours on a summer afternoon. While there, I started my stroll at the staircase on the corner of Michigan and East Lower Wacker. After approximately a 10-minute walk, I stumbled onto the perfect place to grab a drink, City Winery. Not to be confused with their actual restaurant location on West Randolph, this City Winery is pretty much just the bar version and is only open during the summer. The original restaurant prides itself on its high-end culinary options, but this bar offers mostly small bites, a wide variety of alcohol options and some of the best salted-caramel ice cream I have ever had. The staff is super-friendly, the crowd is energetic and live music is played every Thursday to Sunday from 3 p.m. to 6 p.m. But if you can’t make it on one of those days, don’t think that you’ll miss all of the fun. I was there on a Wednesday afternoon, and although there wasn’t a performance, there was a Michael Jackson tribute in which his music was played, along with covers of his songs, for more than an hour! Getting to City Winery is simple. On the opposite side of the river from the Trump Tower, walk down the staircase at State Street, walk toward Dearborn Street and you’ll run right into it! It is basically located between State Street and Dearborn Street on the river.

Leisure biking is another must-do while visiting. Chicago is a great city to bike because of its flat terrain and convenient bike-sharing system, Divvy. Divvy has hundreds of stations and thousands of bikes available 24/7, 365. For only $10, you can buy a 24-hour day pass and get unlimited rides. The only catch is you have to re-dock the bike at one of the stations every 30 minutes or be charged an extra fee, but once you dock, you can immediately check it out again and start your 30-minute session over. I suggest biking down the Riverwalk or Lakefront Trail. The trail itself is more than 18 miles long, but if you stop in near North Avenue Beach and head toward the south volleyball courts, you’ll get one spectacular view of the city’s skyline and what I referred to as “the money shot.” If you’re able to, time it just right so that you end up there during sunset.