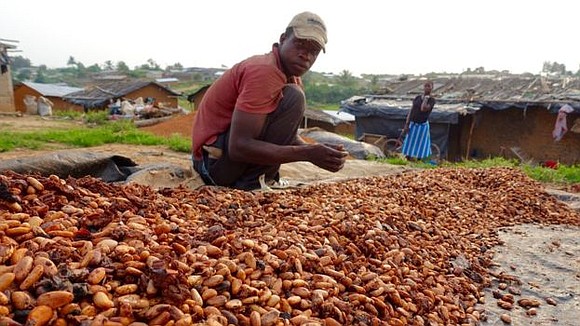 Troubles in the Ivory Coast have pushed the price of cocoa to its highest level in five years.

Don’t blame the farmer. In the world’s largest producer of cocoa, farmers have been going hungry since government slashed the price it guarantees for farmers by 36 percent, and then withheld payments due since October, even as the nation’s economy grew by close to 9 percent for each of the past four years.

Visitors to the capital, Abidjan, may see signs of new wealth and a surge in construction transforming the city. Investors have poured in from Mauritius to Morocco. But many ordinary Ivorians have yet to see the benefits of growth.

Daily broadcasts on state TV celebrate the nation’s so-called economic miracle, but an outburst of social unrest this year—the worst since 2011—is a sign that people are running out of patience.

“There’s a colossal development gap between Abidjan and the interior,” Youssouf Carius, an economist with Pulsar Partners, a private investment fund, told Bloomberg News. “Even though some areas have a lot of potential, private investment won’t arrive as long as public services remain largely non-existent.’’

“People feel that inequality is growing, and it’s a feeling that’s fanned by symbols: in Abidjan, you won’t go a day without seeing a Porsche Cayenne,” Ranie Kone, an economist, told a reporter. “We’re in a culture where showing off is very important and people tend to live above their means.”

While farmers, rough diamond miners and former rebel soldiers struggle to earn a living wage, the number of dollar millionaires in Ivory Coast has climbed 45 percent in the past decade to 2,500, more than the African growth average of 19 percent, AfrAsia Bank Ltd. said in a report. It’s likely to jump another 80 percent in the coming decade, according to the bank.

Meanwhile, more than 8,000 former rebel soldiers who were promised bonuses for helping to bring President Alassane Ouattara to power in 2010 are taking up arms over the promise broken by the administration. Military violence has been reported in the nation’s two largest cities, and witnesses on the ground describe empty streets and closed schools, banks and offices in the upscale Plateau District.

“The situation is dangerous in terms of what will happen if a full-blown confrontation erupts between loyal forces and mutineers,” Al Jazeera’s Ahmed Idris reported. “The civilian population will be caught in the crossfire.”

Elsewhere on the continent, Madagascar, the world’s largest grower of vanilla beans, is predicting steep price hikes after a tropical cyclone in March destroyed more than 30 percent of the crop.