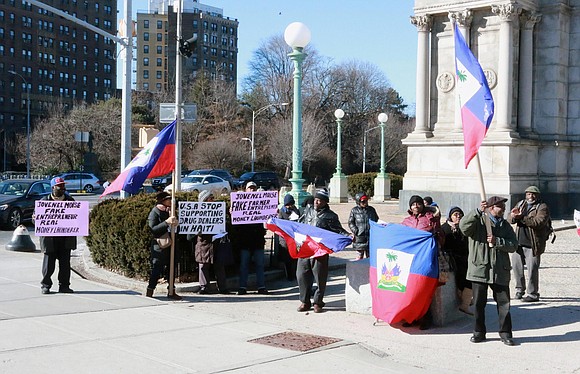 Over the past 10 years, Haiti has dealt with major tropical storms, a major earthquake and a hurricane. They still haven’t recovered. But according to President Donald Trump’s administration, the 50,000 Haitians in America with Temporary Protective Status should head right back to their homeland.

Tuesday, labor leaders, elected officials and community groups gathered at Foley Square in lower Manhattan to call on the Trump administration to extend TPS status for the Haitians who escaped to the U.S. in the aftermath of natural disasters.

“Haiti was hit by a horrible earthquake and, recently, by a hurricane that destroyed the southern part of Haiti,” said New York City Council Member Mathieu Eugene at the news conference. “And we have to add to that cholera [epidemic] destroying part of the population. The country’s also in political turmoil.”

Last month, the AmNews reported that James McCament, acting director of the U.S. Citizenship and Immigration Services, wrote a letter declaring that conditions in Haiti have improved enough to recommend ending TPS for Haitians. Department of Homeland Security Secretary John Kelly has final say in the decision.

“This is unconscionable,” said 1199SEIU United Healthcare Workers East President George Gresham in a statement. “When our brothers and sisters are hurt, we all are hurt. We know the contributions Haitians living in the U.S. under TPS make not just as work, but to their communities back home. We demand this government keep faith with our Haitian sisters and brothers by extending TPS.”

After the major earthquake in 2010, President Barack Obama’s administration offered TPS to Haitians. TPS was extended several times, and the latest extension expires in late July. In McCament’s letter, he desired that TPS for Haitians be extended to January for an orderly transition.

Dr. Natacha Pierre, a pediatrician who moved to America from Haiti when she was 7, said she was awarded a grant to go to Haiti for two weeks this year to give medical services to people in the rural areas of the country.

“It was a very eye-opening experience and I was very amazed,” said Pierre during the news conference. “The situation is very dire. After the earthquake. After the hurricane and whole bunch of natural disasters. There’s malnutrition and infectious diseases. Things that are preventable in the United States, but are huge issues in Haiti.”

New York City Council Member Jumaane Williams said that none of this predicament is by accident. He believes ever since Haitians got their freedom (they were the first African slaves to fight successfully for their freedom), there’s been a negative depiction of the country.

Williams continued, “There have been forces that have been trying to get you to believe that Haiti is less than. And I believe that is because many people don’t want us to understand the history of Haiti. I think it’s because they freed themselves and they gave us hope they make them want to be downtrodden right now.”