Malcolm X: What’s in a name? 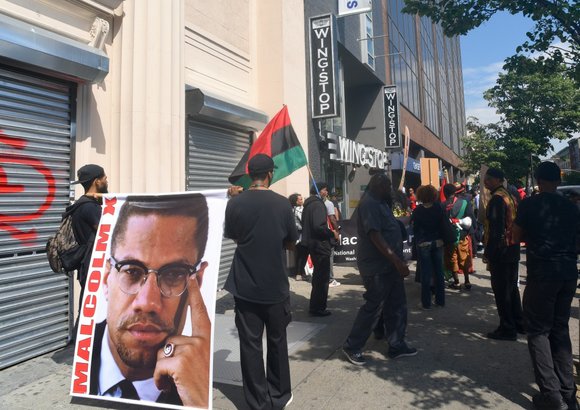 Upon returning to New York City on May 21, 1964, after his hajj to Mecca, Brother Malcolm X picked up right where he left off when he departed several weeks earlier, on April 13. As his understanding expanded, he took on various attributes that reflected his growth and development throughout his short time on this physical plane. The new experiences overseas heightened his social and spiritual awareness, and he added to his name once more.

“Hajj is a title given to any Muslim who makes the pilgrimage to Mecca during the official hajj season,” brother El Hajj Malik El Shabazz explained during a May 1964 New York City news conference.

After being born in Omaha, Neb., May 19, 1925, Malcolm Little resided at various locations in Michigan while in foster care. During February 1941, he moved in with his sister, Ella Collins, in Boston. Two years later he migrated to Harlem, NY and became enamored with the fast-paced hustle of the city’s underworld, where he was known as Detroit Red.

While incarcerated in the Massachusetts prison system for burglary (February 1946 until August 1952), he began studying the teachings of the Hon. Elijah Muhammad under the doctrine of the Nation of Islam and was known as Malachi Shabazz.

After his release from prison, he formally became known as Minister Malcolm X, and shortly thereafter headed NOI temples in Detroit, Boston, Philadelphia, Harlem and other cities for the next decade.

“We were all up in the Hotel Teresa with Malcolm X before he left to the airport when he went to make hajj in Mecca,” recalled Eye God Allah, one of the infamous Blood Brothers mentioned in Malcolm’s autobiography. “We all stood and did a prayer for him to make a safe journey.”

After announcing his exodus from the NOI on March 8, 1964, Malcolm traveled to Saudi Arabia and Africa, and while delivering a lecture in Ghana on May 13, he revealed how he had been bestowed with another attribute by his continental comrades.

“When I was in Ibadan at the University of Ibadan last Friday night, the students there gave me a new name, which I go for—meaning I like it. ‘Omowale,’ which they say means in Yoruba—if I am pronouncing that correctly, and if I am not pronouncing it correctly it’s because I haven’t had a chance to pronounce it for 400 years—which means in that dialect, ‘The child has returned.’ It was an honor for me to be referred to as a child who had sense enough to return to the land of his forefathers—to his fatherland and to his motherland.  Not sent back here by the State Department, but come back here of my own free will.”

He continued, “I’ve always had the name Malik El Shabazz on my passport, [However,] I only used it in the Muslim world. I’ll probably continue to use [the name] Malcolm X as long as the situation that produced it continues to exist … so I remain Malcolm X as long as there is a need to struggle, protest and fight against the injustices our people are involved in, in this country.”

For the remainder of his physical life he was still a Muslim, yet he also focused on advocating Black nationalism and the power the people possessed, and he began planning to charge the United States with human rights violations against African-Americans at the United Nations.

The 52nd annual pilgrimage to Ferncliff Cemetery in Westchester County, where the bodies of Malcolm X and his wife Betty are interred, departs from the corner of 125th Street and Adam Clayton Powell Jr. Boulevard this Friday at 10 a.m. Participants are asked to gather at 9 a.m.

On returning to Harlem, the December 12th Movement will conduct their 28th annual “Black Power Shut’em Down!” economic boycott, which forces all businesses along 125th Street to close their doors from 1 p.m. to 4 p.m., in a mighty display of self-determination.

Harlem’s Schomburg Center and the Malcolm X and Dr. Betty Shabazz Educational Center also have events throughout the weekend.