Proficient on both offense and defense, Golden State only lacks empathy 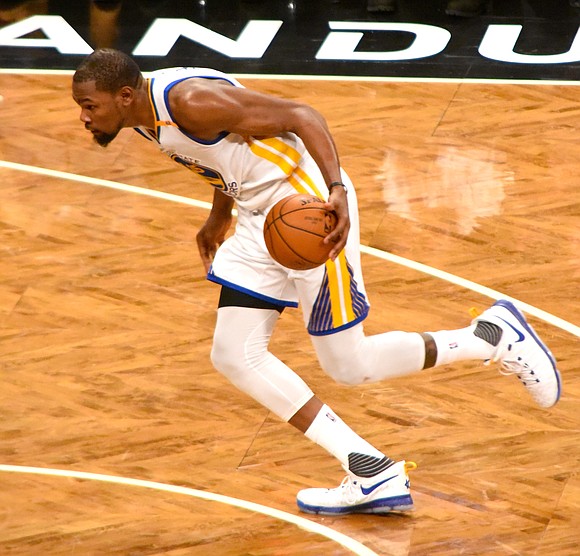 They each took a different road to get here. They each secured a top-seeded position, and then advanced to these NBA Conference Finals—East and West. Although there’s no disputing that these four teams belong, two will soon be eliminated and the NBA championship will begin.

The Eastern Conference Finals began last night (Wednesday) between the Cleveland Cavaliers, the defending NBA champs, the No. 2 seed, and the Boston Celtics, the No. 1 seed. In the Western Conference, it’s the NBA’s two best on record, the now hobbled second-seeded San Antonio Spurs versus the first-seeded Golden State Warriors.

The Spurs not only face a superior Golden State team who’s proficient on both offense and defense, but also face them without their guard Tony Parker, out for the remainder of the season, and now forward Kahwi Leonard, who is day to day because of a re-occurring ankle injury, this time sustained Sunday in Game 1 of the Western Conference Finals. Leonard was taking a deep corner three in front of his team’s bench, injuring his ankle landing on the foot of Zaza Pachulia, the Warriors’ 275 pound, 6-foot-11 center who was defending him.

The team reports that there’s no structural damage, based on the MRI of Leonard’s ankle, but that did nothing to calm the temper of Greg Popovich, the Spurs head coach, who dramatically stated his anger about the play, which he describes as dirty.

“Our best player is down,” Popovich said about the health of Leonard, their franchise player, and his availability for the upcoming playoff games. “We don’t know where he is at today. We still have a chance at something special. We felt with him, we had really good chances.”

And they do, did, but not without Leonard.

Golden State, who came from behind Sunday in the third quarter—at one point down by 26—winning by two, 113-111, blew out the Spurs in Game 2, 136-100. They forced 19 turnovers in each game and hit 18 threes in the second. It was 39 assists for the Warriors Tuesday night and 21 for the Spurs. There was no empathy. They took advantage of Leonard’s absence and dominated the Spurs from the very beginning.

“We know they’re a little undermanned, but they still play extremely hard,” said Warriors forward Kevin Durant, in a complimentary-like way. “We couldn’t come out here and relax and think they were just going to give us the game. We had to go take it.”

The Spurs, down 2-0, will need to get more scoring, especially consistent scoring from LaMarcus Aldridge, if they expect any wins in this series. He contributed 28 points in Game 1 but only 8 in Game 2.

“In Game 3, I expect to see a different team,” said Popovich, with hopes of Leonard being available for the next two games in Texas Saturday and Monday.

The Warriors are competing for the Western Conference chip for a third straight year. A win secures their third straight championship appearance. They won it all two years ago against Cleveland, and lost it to them last year in seven games, the first NBA championship for the Cavs’ franchise.

Only two wins stand between Golden State and this season’s NBA Finals right now—Golden State versus the winner of the Cleveland-Boston matchup.