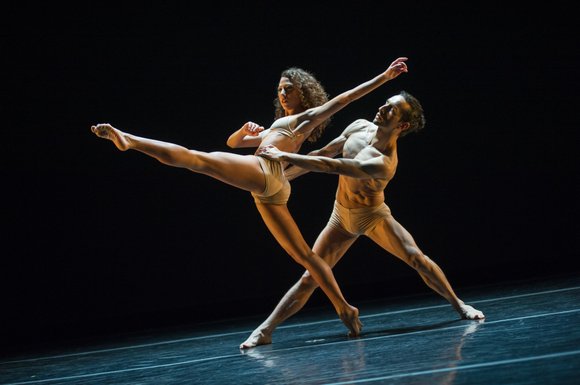 Though hard to believe, Eduardo Vilaro, artistic director and CEO of Ballet Hispánico, has held this role for seven years now. After 39 years of dedicated leadership from Founding Director Tina Ramirez, it is safe to say that the look and trajectory of Ballet Hispánico today truly represents Vilaro’s vision. For their season at the Joyce Theater (April 19-23), featured were contemporary works by Latina choreographers: “Línea Recta” (2016) by Belgian-Colombian Annabelle Lopez Ochoa; “Con Brazos Abiertos” (world premiere) by Mexican-American Michelle Manzanales; and “3. Catorce Dieciséis” (2002) from Mexican-born Tania Pérez-Salas. The Cuban-born Vilaro really meant it when he said, “A goal of mine is to have a certain authenticity that comes directly from the artists.” And these Latina women examine the “human condition,” symbols of personal relevance and the passion in dance to tell their story.

Pérez-Salas’ “3. Catorce Dieciséis,” or “3. Fourteen Sixteen,” is dark, episodic and is the most abstract in her questioning of the “human condition.” Manzanales’ “Con Brazos Abiertos,” which translates to “With Open Arms,” was personal and picturesque. There were traditional Mexican skirts, lily white costumes, sombreros and a mix of folkloric and colonized dances, framed by voiceovers with humorous stories of growing up in two worlds—Mexican and American. But amid the smiling faces and swirling voluminous skirts, Manzanales wanted her audience to see more. “Escúchame,” (“Listen to me,”) she said in one instance. From the start, Ochoa’s “Línea Recta,” or “Straight Line,” a deconstructed world of flamenco, offered up delineated lines (male versus female), no questions asked. It was all about posturing

The cast, Melissa Fernandez, Christopher Bloom, Mario Ismael Espinoza, Mark Gieringer, Lyvan Verdecia, Eila Valls, Shelby Colona and Diana Winfree, are profound in their translation of Ochoa’s mining of the spirit of flamenco. Danielle Truss’ fiery red costumes (allowing for bare skin here and there), are equal partners, and each piece beautifully sculpts the dancers’ bodies. First in a solo, and then joined by bare-chested, macho men in high-waisted flamenco pants, Fernandez is lovely as she creates visual designs with her long, ruffled bata de cola, and they manipulate her every move. Later, when others join, the temperature intensifies as alternating partners and different groups explode with repeating gestures, fierce downcast eyes, slow, precise and calculated movement that scream passion. Before they end, in a circle, one-by–one, they exchange and applaud each other’s moves, until finally they face away from the audience and in silhouette, close together, slowly interlock arms over shoulders and walk into darkness. This is Vilaro’s Ballet Hispánico!