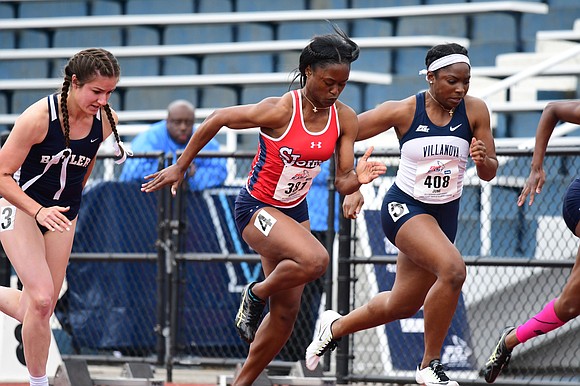 The NCAA Outdoor Regional Championships take place today through Saturday in Lexington, Ky. Three members of the track and field team from St. John’s University will take part: Maya Stephens in the 400 meters, Adriana Wright in the 100-meter hurdles and Nyla Woods in the hammer throw. They hope to advance to the NCAA Outdoor National Championships to be held in Eugene, Ore. next month.

All three women earned All Big East conference honors. This trip is a first to the NCAA Championships for Wright, who competed at the NAIA and Division III levels before coming to St. John’s. In her first year in Division I competition, Wright earned gold medals in the 100-meter dash and 100-meter hurdles at the Big East Championships. Red Storm head track and field coach Jim Hurt said Wright has been dedicated and focused, as well as being a great student.

“She’s exceptionally talented and a great competitor,” said Hurt. “You can’t get anything better than that. The key is getting her to realize exactly what she can accomplish.”

Some bad weather this spring has hampered a bit of the track team’s outdoor training. Hurt calls track a “naked sport,” meaning athletes are mostly competing alone and have to be self-motivated. Wright has forged a bond with St. John’s sprints coach Aliann Pompey, who has pushed her to excel.

Stephens, who got a late start in outdoor season because of a hamstring injury, established her presence as soon as she was cleared to compete, including being named Most Outstanding Track Athlete at the Big East Championships. “Her outdoor season is really just starting,” said Hurt.

In July, Stephens will represent Canada at the 2017 Francophone Games in Abidjan, Ivory Coast. She has her sights set on competing at the 2020 Olympics. Hurt said there have been St. John’s athletes at the past eight Olympic Games.

Woods is making her third trip to the NCAA Regionals. “She’s one of the best young throwers in America,” said Hurt. “If the weather holds up, it could be great.”

Hurt added, “We’re fortunate to have great kids. In track, the individual has to have the willingness to do the work and then have the courage to believe they can get to the top level. It takes a while for it to happen.” His athletes have 98.5 percent graduation rate.