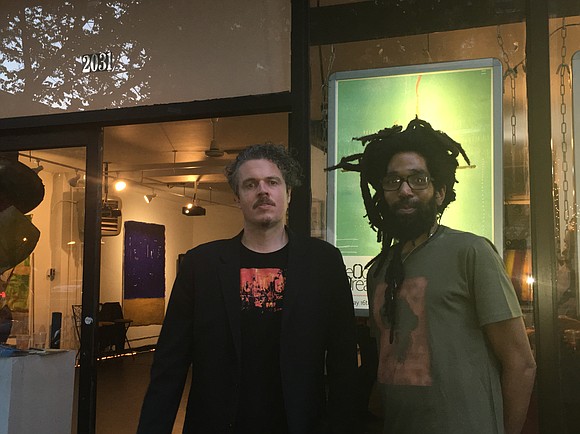 Because of our colonial history, we have struggled to interpret ourselves even in post-colonial times. “Can the mind be decolonized?” asked Mnisi. “I therefore believe that by honestly looking at our history in totality—pre-colonial, colonial and post-colonial times—we can truly understand where we are and how we should relate to the world and the future. In my work I am finding a new interpretation for an old language.” Mnisi lives and works in Johannesburg, South Africa and in Brooklyn.

Built on the 35-mm photographic image, Cannon Hersey creates artworks utilizing silk-screen, photo-etching, mixed-media, light-box and installation. He and Mnisi have collaborated on various artworks. Hersey is committed to connecting art and the public in unique and unexpected ways to explore the meaning of race, religion, culture and commerce in the modern global world.

“ReOcurring Dreams” is curated by JaSon Auguste for the Wadada Arts Foundation. For appointments, contact rawspaceharlem@gmail.com or call 646-707-2586. Gallery hours are Monday to Thursday 4:30 p.m. to 8:30 p.m.


The violinist and composer Regina Carter was welcomed with outbursts of admiration during her recent four-day engagement at Manhattan’s Jazz Standard. She was celebrating the release of her latest CD, “Ella: Accentuate the Positive” (Okeh Records).

“Whenever I hear an Ella recording it grabs me at my core,” says Carter. “I’m so excited to celebrate Ella Fitzgerald, an artist who has meant so much to all the notes in my musical life.”

When recording a tribute CD to the likes of the great “Lady of Song” Ella Fitzgerald, it becomes difficult not to be redundant. After all, she recorded the songs of damn near if, not all, of the “Great American Songbooks”—Harold Alden, Rodgers and Hart, Ira and George Gershwin, Irving Berlin, Count Basie, Duke Ellington and Cole Porter.

At the beginning of her set, the MacArthur fellow noted, “I didn’t want to interpret all those songs Ella has turned into popular standards. So for this recording, I decided to use her B-side songs, some of which you may not have heard before.”

Her statement was so true. I was only familiar with two of the nine-tracks on the CD that were performed that evening. The title track (“Accent-tchu-ate the Positive”) was song by her special guest and noted vocalist Carla Cook. She infused this standard with more soulfulness and swing as Carter’s violin just heighten the case for more zing.

The other song was “Crying in the Chapel,” which ironically was a hot cross of the blues with twinkles of gospel truth. The song became a hit in the Black community through the voices of the 1950s R&B group, the Orioles.

Carter’s version, arranged by the bassist Ben Williams, takes in the blues on a midtempo scale. Her violin strings become entwined with your heart strings, but that is the magic of Carter’s musicianship. Then the electric piano comes in and just changes the course for a brief moment.

The title “I’ll Never Be Free” can take on an abundance of meanings, but for this performance and recording, the quintet was immersed in the blues. Carter has mastered her instrument to the point where it can holler out in amazement or swoon in sweet sounds of joy.

Fitzgerald’s perfect pitch turns every lyrical phrase into a rhythmic soliloquy, and Carter’s enticing strings adds a most inventive tribute to the “First Lady of Song.”