James and Ciprès on solid course in Olympic quest 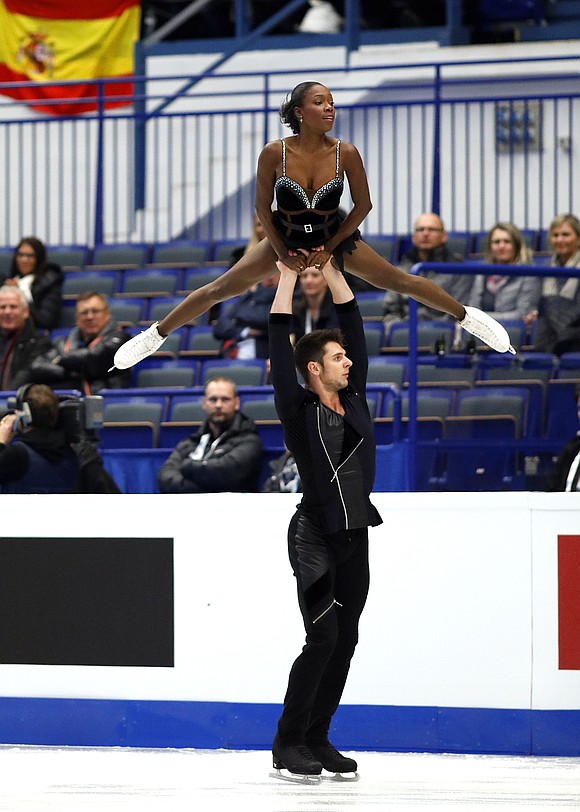 Vanessa James, who represents France in pairs skating with partner Morgan Ciprès, is unquestionably the most prominent Black figure skater on the international competitive scene and will be one of the highest profile Black athletes contending for a medal at the upcoming 2018 Olympic Winter Games. Heading toward their second Olympics as a team, James and Ciprès are turning in strong performances. In September, they won the Autumn Classic in Montreal, and last weekend finished third at Skate Canada International in the Grand Prix series.

“We’re on the right road,” said James, 30. “What we’re working on now is cleaning everything up and being a bit more expressive and giving more to the audience. … If we continue skating like this, with a little bit of mileage [on our programs] we can do very well.”

Last year, the pair moved to the United States for training. In recent months they relocated from the Miami area to Wesley Chapel, Fla., where they train at the new Florida Hospital Center Ice. It has been an emotional few months, as Lucy Barrett, wife of one of their coaches, Jeremy Barrett, was diagnosed with leukemia. When they were in Regina, Saskatchewan for Skate Canada, they got the news Lucy is cancer free.

“We decided to skate for her because she deserves the best,” said Ciprès, 26. “We try to stay focused on our work.”

James and Ciprès enjoy their new training facility, which provides everything they need for optimal training, including an Olympic-size ice surface (many rinks are the smaller NHL size). There is a gym on the premises. They’ve kept to a similar routine last season, which saw them achieving improved results and greatly increased recognition. In addition to Barrett, they work with coaches John Zimmerman, Silvia Fontana and John Kerr.

“Now we’re contending for a medal,” said James. “When you get to the Olympics and you want to skate so well, that’s where all the stress and pressure comes in. What we need to do is concentrate on skating like we would like to do at any competition. … We’re more confident than we were four years ago.”

Next up for James and Ciprès is Internationaux de France, the French stop on the Grand Prix circuit. They hope to earn a spot for the Grand Prix Final in December.