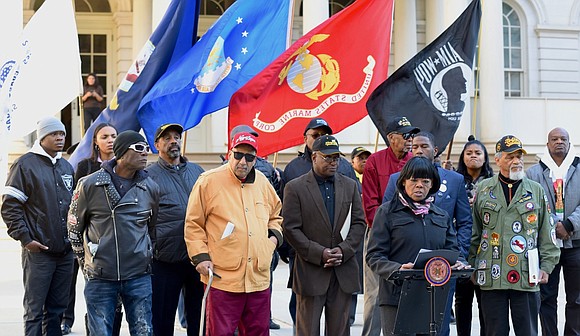 African-Americans have participated in every war fought by or within the United States. According to the U.S. Department of Veteran Affairs, Black veterans make up 11 percent of the total veteran population of 20.9 million men and women.

As veterans continue to come home from America’s conflicts, statistics show that some Black veterans are still left out when it comes to benefits.

Black Veterans for Social Justice is not only making sure Black vets get their fair share of government programs but is also taking stances on various social issues. The organization was founded 38 years ago in 1979 by Job Mashariki for Black vets coming out of the Vietnam War who wanted to change social ills.

A veteran himself, Mashariki is one of those Brooklyn activist icons who moves quietly in the background while making huge things happen in the foreground. This beloved elder remains modest about his impact and the impact of his organization.

“Today, BVSJ helps veterans and non-veterans with housing and employment for veterans along with other social services,” said BVSL President and CEO Wendy McClinton, a U.S. Army veteran. “On any given year we service 5,000 veterans and their families. We are really trying to change the face of what it means to be a veteran.”

“The issues that the veterans are facing include services that are inadequate,” said Mashiriki, “medical facilities are not sufficient, housing for veterans is very scarce and it should not take 10 years for them to get their academic accomplishments. People are fighting wars and not being able to come back and buy homes. Veterans are being taxed for their injuries. And there is the issue with substance abuse and re-entry.”

The organization recently expressed concerns over the treatment of Black Army Sgt. La David Johnson and his family by President Donald Trump. During a phone call to Johnson’s widow, Trump was highly criticized for saying Johnson “knew what he signed up for.” “Donald Trump’s insensitivity continues to insult Gold Star families, veterans and civilians at large,” the organization said in a statement. “The question of what happened in Niger must be answered.”

Mashariki explained, “The news conference for Sgt. La David was us wanting to put out there that veterans need to come together to determine what issues are affecting them and how they need to address getting them resolved. It gave us a good opportunity to come together and organize our community. We brought together a number of national organizations and local chapters of veteran organizations.”

He continued, “We wanted to make it clear that we wanted to be a force of bringing to attention of what is not right with the military, particularly with the so-called president of the United States disrespecting a Black woman and the Gold Star mother.”

BVSJ provides several community activities out of its Bed-Stuy Brooklyn facility, including job placement, health awareness, a food pantry and mentoring. Services are for anyone in the community; however, BVSJ takes special interest in veterans.

Black veterans are getting younger, according to the VA Department. Blacks make up 10 percent of all veterans between 17 and 34, compared to 7 percent who are white. McClinton said one reason why more Blacks opt to join the military is because of the unemployment rate among young Black men.

“Since there are no jobs a lot of our young Black men and women are told, ‘You might as well go into the military,’” McClinton said. “Many Blacks go military for different reasons—to support our family, get a better job and a better life. Whites go because they want to defend our country.”

One issue plaguing many Black veterans is the transferring of skills learned in the military into full-time work. Better employment services and job training are a few things younger Black veterans need, according to McClinton.

“A lot of our Black veterans that are coming out have low education level that prevents them from entering into workforce that would give them more resources to live in New York City,” she said. “We need to access more union and local trade jobs so that they can learn hands-on skills and sustain families.”

Another issue facing veterans across the board is mental health. Cases of post-traumatic stress disorder continue to affect many veterans, who are not getting the proper help they need. Research from the VA says most ethnic minority veteran groups have a higher rate of PTSD than white veterans.

When looking at the aftermath of the Vietnam War, African-Americans had greater exposure to war stresses and had more predisposing factors than whites, which appeared to account for their higher rate of PTSD.

“Veterans are transferring out of military with mental illnesses that are not known and identified while they are in the military,” McClinton said. “More resources need to be made available so they can make a clean adjustment back into the city.”

Although BVSL has services for veterans, McClinton said that the community can also do several things to help veterans. Americans usually take the time to recognize veterans during Memorial Day and Veterans Day, but community residents can do small things year-round to help America’s heroes.

“Support Black veterans, partner with a nonprofit and provide in kind services,” McClinton suggested. “Some people skills that organizations need like grant writers or they can join boards and help move some of the agendas.”

“Veterans are honorable and responsible,” she said. “They have some really good skills and you can help us change the face of veterans.”