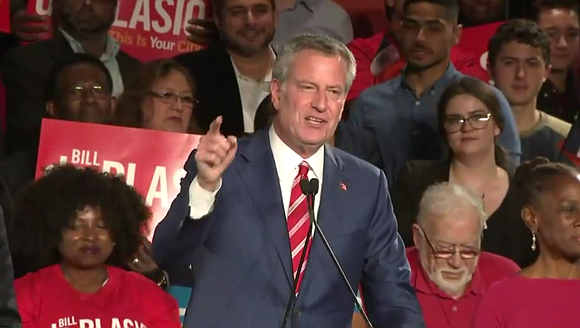 New York City residents re-elected the mayor with 66.5 percent of the vote, beating out Republican challenger New York State Assembly Member Nicole Malliotakis, who finished with 27.8 percent of the vote. But that didn’t mean that New Yorkers were flocking to the polls. According to the Board of Elections count early Wednesday morning, approximately 22 percent of more than 5 million registered voters cast their ballots in this election.

Nevertheless, the election proved to be an easy one for the mayor, who ran on a progressive record and on fighting against President Donald Trump’s agenda from his City Hall post.

“They said things would go in the wrong direction,” said de Blasio. “Well, they were wrong. You saw some important changes in the past four years, but you ain’t seen nothing yet.”

Malliotakis, however, saw the lack of enthusiasm behind de Blasio as a message to the mayor and his agenda.

“Today New Yorkers sent a loud and clear message to City Hall,” said Malliotakis to supporters at her election night party. “And although we did not win this election, we were loud and clear in showing that the status quo must end and that there are many people—thousands of people across this city that deserve to be heard—the hard-working taxpayers that get up each and every day they also want to be represented by the mayor of the City of New York.”

Although there might have been lack of enthusiasm among New Yorkers, the mayor’s base held steady. Labor leaders came forward to celebrate de Blasio’s re-election. DC 37 Executive Director Henry Garrido praised the mayor’s policies for working-class New Yorkers and those who aren’t part of the 1 percent.

“For the past four years, he has forged a path to improving the quality of life for all New Yorkers,” said Garrido in a statement. “From universal pre-K and universal free school lunch to expanded affordable housing, improved community policing and treating the city’s public employee workforce with a degree of respect not seen in the two previous administrations, the mayor has stood up for working families.”

“Today voters said loud and clear that they want to keep our city a progressive place that protects the rights of working people,” added 32BJ President Hector Figueroa in a statement. “32BJ members helped get out the vote for the candidates with a history of standing up for workers’ rights, immigrant rights, good public education, affordable housing, criminal justice and police reform. These issues aren’t just important to our members but to all working New Yorkers. We look forward to working with our newly elected city government to keep winning for working families.”

Retail, Wholesale and Department Store Union President Stuart Appelbaum was quick to remind the public of who hopped on the de Blasio re-election train before anyone else.

“We were the first to endorse Mayor Bill de Blasio’s re-election campaign because we know in his second term he will continue to fight for working people throughout the city, just as he always has,” stated Appelbaum. “Mark Gjonaj, Elizabeth Crowley, Margaret Chin and Justin Brannan had hard fought general elections, and we are still awaiting the results for Elizabeth and Justin. Our endorsed candidates know what hard-working families need in New York City to live and work here—and we know they will work closely with us to protect our city's working women and men.”

New York’s Democratic victories were a microcosm of important victories by Democrats across the country. Dems won the gubernatorial races in New Jersey and Virginia and mayoral positions in places such as Charlotte, N.C. and Topeka, Kan.