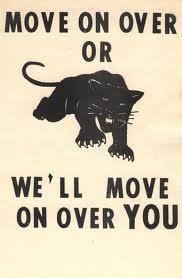 The events kicked off Friday, Oct. 27, at the Unitarian Church of All Souls (79th Street and Lexington Avenue) with a reception by visual artist Sophia Dawson and the screening of the film “Panther Cub: My Journey to the Frontline,” by filmmaker and Panther Cub, K’sisay Sadiki.

Saturday morning, Charles “Cappy” Pinderhughes, Ph.D., sociology professor and former BPP lieutenant of information (New Haven, Conn.) conducted the workshop “Marxism and the Black Panther Party: The role of Marxism in the Development of the BPP.”

That same afternoon, at the Schomburg Center for Research in Black Culture (515 Malcolm X Blvd.), BPP veteran Captain Bullwhip presented “an exhibit on Black Power Poster Art and how poster art drove the Black Power and Black Movement all throughout the country.” The presentation featured “bold insurgent poster art of Emory Douglas, the legendary minister of information for the BPP.”

Later that evening at the Unitarian Church of All Souls, “the Cubs, elders and comrades convened together and bonded for the evening’s dinner featuring an all revolutionary children and cadre of the struggle,” initiated by vegan chefs and children of BPP political prisoner-of-war Russell Maroon Shoatz—Russell Shoatz III and Sharon Shoatz.

Kakuya Shakur, daughter of political refugee, Assata Shakur, was present and acknowledged by her loyal comrades, just days before the 38th anniversary of her mother’s Nov. 2, 1979, exodus from a New Jersey state concentration camp.

Allegra Taylor, shared the story about her father, fallen comrade Hugo “Yogi” Pinell, “a political prisoner held captive over four decades in solitary confinement, who was murdered within two weeks of his release from solitary confinement into general population.”

One of the most visible Cubs, Fred Hampton Jr., son of police terrorism victim, Chairman Fred Hampton of the Illinois Chapter BPP, advocated the “importance of knowing the past wrongs committed against our people by the system, so they don’t happen again.”

An acknowledgment was made for several Cubs who have joined the ancestors.

“Each generation must discover its mission, fulfill it or betray it, in relative opacity,” wrote Frantz Fanon in “Wretched of the Earth.”