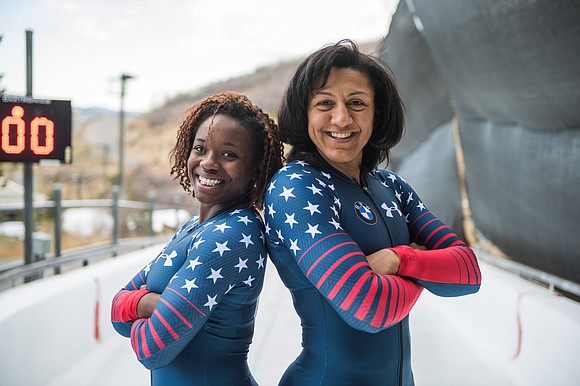 Entering her third season in bobsledding, former collegiate sprinter Kehri Jones is still getting accustomed to the cold and not really knowing what is happening as she sits with her head down behind driver Elana Meyers Taylor. Just as track athletes have before her, Jones has taken up the sport of bobsled and is racing full speed toward the upcoming Olympic Winter Games in PyeongChang, South Korea.

“Bobsledding really is scary,” said Jones, the brakeman in the two-man bobsled. “Our home track, Lake Placid, is the roughest track in the world. You get in this sled and you feel you’ve been tossed around like a rag doll. Then you go back to the top and do it all over again.”

Jones, 23, was recruited by driver Meyers Taylor, a two-time Olympic medalist who was reaching out to strength and conditioning coaches searching for a good match. Jones did a combine and rookie camp, excelling at both. In Jones’ first World Cup race with Meyers Taylor, they broke the start record and placed second. That’s when Jones realized she is pretty good at the bobsled, and she really enjoys it as well as the close-knit winter sports community.

Jones has always been driven and highly motivated. She graduated high school at 16 and finished her time at Baylor University with both her bachelor’s and master’s degrees. “School never was hard for me,” said Jones, who had already begun bobsled training before her December 2015 graduation.

The first Black athlete to win gold at the Olympic Winter Games was Vonetta Flowers, a former track athlete who took up bobsledding. At the 2014 Games in Sochi, Meyers Taylor paired with Lauryn Williams, a two-time Olympic medalist in track. Their silver medal put Williams in rare company as one of only a handful of athletes to medal at both the Summer and Winter Olympics.

“Our sport didn’t have a lot of men or women of color,” said Jones, who has always admired Williams, who retired shortly after Sochi. “Now our team is full of African-American women who are constantly making history and who are pushing the sleds faster than they’ve ever been pushed before.”

She added, “Our team is all about breaking barriers and defying odds. People watch the Winter Olympics because our sports are so extreme. We’re crazy strong and all about winning.”