Thanksgiving Day celebrated in the city 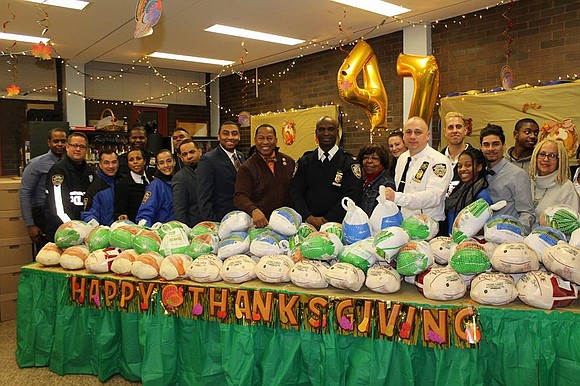 The spirit of Thanksgiving was felt across the city as people came together to celebrate the holiday with food and camaraderie. There was also a sense of giving back as many people across the city are volunteering their time to help others.

The National Action Network (NAN) hosted a free Thanksgiving dinner for the community at the House of Justice in Harlem. The event is free and open to the public.

Elected officials and other prominent New Yorkers joined Joel Berg, CEO of Hunger Free America, to release the group’s annual survey on demand at soup kitchens and food pantries and new findings on food insecurity and hunger in New York City and New York State. The report is the only one of its kind identifying how many people in New York City and State are working and still living in hunger. For the first year ever, Berg will walked from site to site, promoting the many soup kitchens and food pantries along the way in all five boroughs. In this march, he joined by community members and people affected by hunger to raise awareness about food insecurity across our city. The full distance walked will be about 32 miles.

Assemblyman Michael Blake teams up with youth for turkey giveaway

At First Corinthian Baptist Church’s was transformed into a restaurant for it's Thanksgiving community dinner that fed over 1,500 people. The dining room featured tablecloths, menus, waiters and hosts in uniform, and table service complete with turkey and trimmings. During the meal, a street team also combed the neighborhood for people in need of a hot meal – Other volunteers also dropped off meals for the elderly and home-bound.

Catholic Charities Brooklyn and Queens distributed 950 turkeys to families in need. The distribution of the 12-14 lbs. turkeys and side dishes will take place in Queens last Friday. Volunteers helped pack the vegetables and turkeys for distribution to the families in need. About 700 turkeys were donated by Alphonse and Maria Catanese and Family, ALMAR Realty Solutions, in memory of the parents of the Catanese's. An additional 250 turkeys were donated by Western Beef. Turkey dinner fixings, provided by the Catholic Charities Food Pantry Network, include fresh potatoes, squash and corn, instant stuffing, gravy, corn and corn muffin mix.

On Monday, Catholic Charities Brooklyn and Queens (CCBQ) metat Bishop Mugavaro Senior Housing Site to give 450 turkeys to families in need, in time for the Thanksgiving holiday. Donors Alphonese and Maria Catanese donated the turkeys, while the NYPD Emerald Society and NYPD Holy name society was presented to help unload and hand out the turkeys.

On Monday, Food Bank For New York City distributed 700 turkeys and chicken roasters with all the fixings to provide dinners to New York families in need this Thanksgiving. The initiative helps lessen the burden on New Yorkers struggling with food insecurity over the holiday period. Volunteers distributed turkeys to larger families, with each bird providing 8 meals, while chickens will go to smaller families, providing 4 meals each. In total, Food Bank distributed 4,400 holiday meals, including 3,200 turkey meals and 1,200 chicken meals.

Bronx City Council Member Andy King (12th District/Bronx) and NYPD's 47th Precinct distributed more than 1,000 free Thanksgiving Day turkeys to families in need in the Wakefield Section on Mondayat the 47th Precinct. The turkeys (and fixings) were personally be handed out by Council Member King and Inspector Ruel Stephenson, commanding officer of the precinct.

On Wednesday, renowned chefs from the city’s finest hotels and restaurants gathered at the Children’s Aid Dunlevy Milbank Center to prepare a meal for community members in Central Harlem. Approximately 2,000 residents were fed at the event every year, including children and youth served by Children’s Aid early childhood and after-school programs.

Newark Mayor Ras J. Baraka was joined by actor/comedian/director Nick Cannon, rapper Dave East, DJ Funkmaster Flex, rapper Jadakiss, and DJ Clue at the City’s 2017 Turkey Drive for Newark residents on Monda, at the John F. Kennedy Recreation Center. More than 6,000 turkeys were given away at the event.