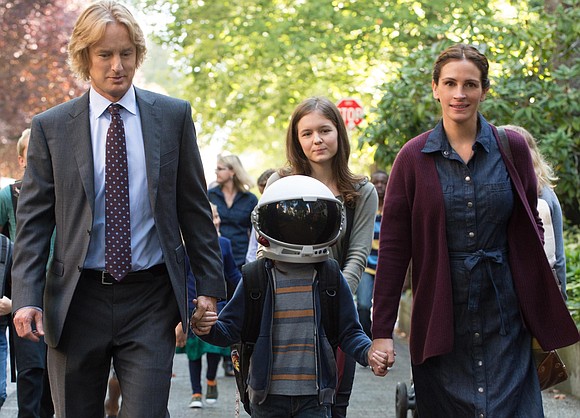 The savvy marketing team for the film “Wonder” sent out the children novel “Wonder” by Raquel Jaramillo months before the screenings began. A few weeks later, other gifts arrived.

The message in the novel inspired a Choose Kind movement noting the obvious, which is that the world needs more kindness and consideration than ever before. The film “Wonder” delivers a fresh and upbeat openheartedness while examining some of life’s most difficult questions. Who teaches us compassion? Where is self-love and therefore self-acceptance actually found? The questions have been asked—since the dawn of time, no doubt—and yet when raised again still deliver a universal punch.

The screenplay by director/writer Stephen Chbosky and screenwriters Steven Conrad and Jack Thorne hits the mark brilliantly with language that speaks directly to children, not around them and not at them. It’s equally exciting to watch a film from their points of view.

“Wonder” traces an epic year in the life of Auggie Pullman, a boy who was born with craniofacial differences. Chbosky and his screenwriting team hit a high note helping to give life to characters that bring great humor and heart to the moving story.

In the lead role of Auggie is actor Jacob Tremblay, and although he’s hidden beneath prosthetics, he sparkles. When the film opens he’s 10 years old and has already been through 27 surgical procedures to correct his birth-defect facial abnormalities. An interesting stylistic choice shows a very matter-of-fact display of Auggie’s hospital bracelets. The audience feels deeply for this character from the very start. Clearly, this kid is the very picture of resilience.

Life keeps moving, and at the urging of his mother, Isabel (Julia Roberts), a woman who placed her own creative pursuits on hold while homeschooling him, Auggie embarks on an epic journey, starting fifth grade at a local prep school. His father, Nate (Owen Wilson), is nervous and questions their decision. Children can be cruel. There are bullies everywhere.

As if on cue, who shows up but a brat who is the product of wealth, a trust-fund boy named Julian (Bryce Gheisar). But young Auggie has allies in his principal (Mandy Patinkin) and his homeroom teacher (played by Daveed Diggs, star of Broadway’s “Hamilton”), and along with his science teacher (Ali Liebert) these adults help make the transition a wee bit better.

The story is divided into chapters; each of them is dedicated to the perspective of one of the young characters, sometimes using flashbacks to bring more life to the story. The first chapter is about Auggie as he enters fifth grade. His older sister, Via ( Izabela Vidovic), gets a chapter, as do her former best friend, Miranda (Danielle Rose Russell), and Auggie’s new school buddy Jack (Noah Jupe), a kind enough scholarship student with loyalty issues. These points of view bring great insight and shed more light on the bully’s motivation.

In a well-placed flashback moment is Sonia Braga, in a cameo, as Auggie and Via’s grandmother who gives Via much-needed attention, a counterpoint, as Auggie’s choice to wear an astronaut’s helmet while he learns to navigate public spaces often comes with taunts and stares. Via has a tremendous first year of high school. Her relationship with her best friend Miranda, although painful, helps her discover first love with a passionate theater nerd (Nadji Jeter) and discover her own flair for the theater arts.

Via and Auggie’s parents are excellent supporting characters in the best sense with Roberts and Wilson adding their signature touches. For Roberts, she conveys Isabel’s pure love and remarkable strength. Wilson brings the needed comic relief.

Chbosky interweaves Auggie’s fanboy fantasies of “Star Wars” and NASA in sequences that both inspire and bring needed humor. At the film’s heart is a powerful anti-bullying message, all wrapped up in a story about the power of forgiveness. It’s a lot to absorb, but it’s a great way to bring up these subjects.

Through it all, actor Tremblay gives great life to Auggie’s emotional roller coaster. The prosthetic makeup is designed by Arjen Tuiten, whose credits include “Pan’s Labyrinth” and “Maleficent.”

“Wonder” is a powerful story of connection and love.